A Wolf in the Dark (Kingdom of Durundal Book 2) 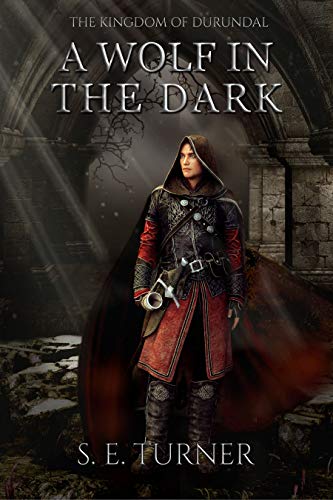 – Learn More
Text-to-Speech and Lending: Enabled
See more titles by S. E. Turner
Here’s the set-up:
In the Kingdom of Durundal; hearts will be broken, loved ones lost and thrones burned – and only one thing is certain – there will be blood.

Lyall has lived and breathed nightmares since he was fourteen years old. He believed he knew every horror, and was beyond surprise. He was wrong.

When General Domitrius Corbulo launches a brutal attack on Castle Dru in Durundal, he slaughters everyone inside. Everyone that is – except a young prince.

Though two years after surviving the attack and finding salvation in a clan, Lyall is one of many captives captured and taken to Ataxata to fight in the Killing Games. However, the man who is training him to be a gladiator, is the same man who butchered and killed his parents. Fuelled with anger and hatred, there is only one person who can help Lyall escape and finally get retribution.
Yet as danger lurks at every turn, and guards prowl every corner, the situation seems hopeless.
But is it?
Sometimes only the direst need can teach us our own depths, and Lyall has yet to discover what he is truly capable of.

‘An intoxicating tale of monsters, heroes, and survival… as pure as a whisper, as delicate as a thought, as dangerous as a wolf in the dark.’

Deliciously epic, this second book in the series introduces a cast of characters that play a pivotal role in all eight books. Perfect for fans of Outlander and Game of Thrones.