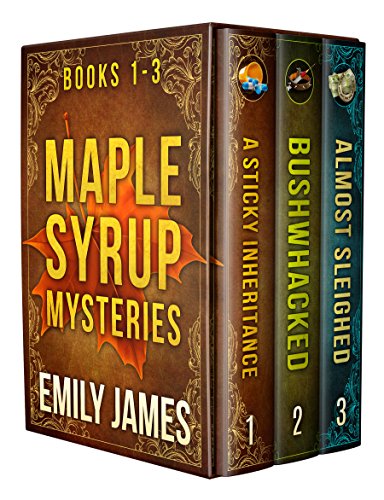 – Learn More
Text-to-Speech and Lending: Enabled
Enjoy Emily James Books? Tell us why and WIN a chance for a FREE ebook!
Here’s the set-up:

With over 700 pages of crimes, clues, and curveballs, these individual books have 250+ five-star reviews on Amazon and Goodreads and have won multiple awards.

If you love small-town settings, quirky characters, and a dollop of romance, then you’ll enjoy this cozy mystery series.

Ex-lawyer Nicole Fitzhenry-Dawes thought that moving to the small Michigan tourist town of Fair Haven and taking over her uncle’s maple syrup farm would keep her far away from murderers, liars, and criminals. She couldn’t have been more wrong…

Sometimes the truth can be a sticky thing…

Nicole Fitzhenry-Dawes feels like the only failure amid a family of high achievers. Her boyfriend turned out to be married, and her career as a defense attorney is in tatters. When she inherits her uncle’s maple syrup farm, she thinks it’s time for a change—one that keeps her far away from bad guys.

For half a day at least.

Her uncle’s suicide wasn’t a suicide at all. And as Nicole closes in on his killer, she not only risks becoming the murderer’s next victim, but also starts to wonder if knowing the truth is ever worse than believing the lie…

Sometimes the most beautiful places hide the darkest secrets…

What former lawyer Nicole Fitzhenry-Dawes wants is to peacefully run her maple syrup farm. What she gets is a body run over by her car. It turns out to be the manager of the local animal shelter, and his death wasn’t the accident it at first seems.

With a little finagling, Nicole convinces the interim police chief to allow her to help with the case, even though she’s also busy trying to settle in to her new role as owner of Sugarwood and figure out her unusual friendship with the county medical examiner.

As Nicole closes in on being able to put the killer behind bars, will she manage to find the evidence she needs before the murderer puts her in a cage—or a body bag—instead?

The truth always comes with a price…

Former lawyer Nicole Fitzhenry-Dawes has finally settled in to her new home in Fair Haven, and her first maple syrup season is upon them. It’s not going as smoothly as she’d hoped.

Their sap lines keep springing leaks, and as if that wasn’t enough, Nicole finds their groom-mechanic, Noah, apparently trampled in one of the horse stalls.

Fair Haven’s interim police chief is ready to declare it an accident, but Nicole believes otherwise. With Noah in a coma, she’s determined to figure out who wanted to kill him before the perpetrator can return and finish the job.

But whoever attempted to kill Noah has other ideas and is willing to do whatever it takes to stop Nicole from discovering the truth—even destroy Sugarwood and the man Nicole loves.

These books are “clean” reads and contain no swearing, gore, or steamy bedroom scenes. While the series is best enjoyed in order, each book is a complete mystery on its own.

Buy Maple Syrup Mysteries Box Set: Books 1-3 today, and try to figure out the real murderers before Nicole does!