It is a truth universally unacknowledged that American playwright Arthur Miller adapted Pride and Prejudice in 1945, according to Janine Barchas from Los Angeles Review of Books… Support our news coverage by subscribing to our Kindle Nation Daily Digest. Joining is free right now! 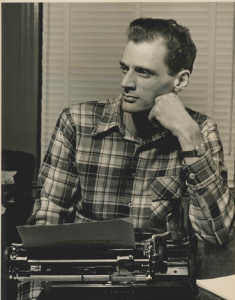 In the Theatre Guild Archive of the Harry Ransom Center in Austin, Texas survives a script, marked “as broadcast,” of Arthur Miller’s adaptation of Jane Austen for radio. Miller’s radio play, with Joan Fontaine as Elizabeth Bennet, aired on Thanksgiving eve, 18 November 1945. That celebratory Sunday was the first American Thanksgiving held in the wake of World War II, warranting special programming. In New York, Miller’s version of Austen could be heard at 10 p.m. on ABC station WJZ. The show made the list of “Today’s Leading Events” in The New York Times and was the Theater Guild’s most highly rated program that quarter, capturing a 19.4 percent share of the national radio audience. Today, Miller’s role as popular adapter of Austen has been all but forgotten.

The Janeite mind reels at the mere idea of young Arthur Miller being tasked to condense Pride and Prejudice to an hour-long format for radio. How could this American playwright, then honing his special brand of tragic realism that would challenge post-war complacency and eventually tilt at the windmills of McCarthyism, possibly give voice to Austen’s light, bright, and sparkling novel? The would-be king of American grit taking a crack at that quiet paragon of Britishness? Surely not. I dismissed the idea as ludicrous when a curator, knowing of my research interest in Jane Austen, casually mentioned the script’s existence. With zero pretentions at scholarly objectivity, I ventured into the archives to read the inevitable travesty for myself.

To my great surprise, I chuckled all the way through the script, disturbing other readers in the sanctum sanctorum of the Harry Ransom Center reading room with my unladylike snorts. That evening I downloaded a recording of the program from a site for dedicated radio buffs and listened to the performance as it had aired in 1945 (only the inserts from sponsors, preserved in the typescript, were absent from the recording). Although the clipped mid-Atlantic accents of the actors and the rapid-fire pace of their dialogue sounded artificial in the mouths of characters whom I knew from Austen’s pages, I was rapt. This deviant script dared to differ from Austen’s established adaptations. Unapologetically American, the language was irreverent and surprisingly modern.