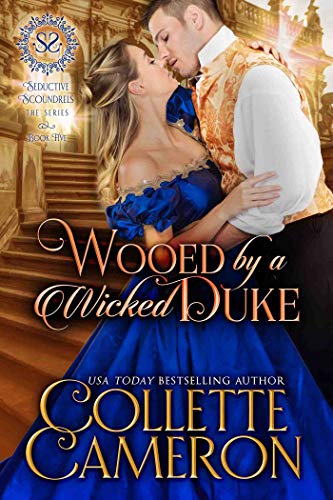 4.8 stars – 27 reviews
Kindle Price: $3.99
Text-to-Speech and Lending: Enabled
Enjoy Collette Cameron Books? Tell us why and WIN a chance for a FREE ebook!
Here’s the set-up:

She’s hiding from the past…
Hoping to put the shame of her father’s disgrace behind her, Jessica Brentwood is determined to be the epitome of decorum and propriety her first London Season. All is well until she’s discovered naked in the arms of a notorious rake, Crispin, the wicked Duke of Bainbridge.

Though thoroughly compromised—through no fault of her own—Jessica refuses the enigmatic nobleman’s obligatory marriage proposal. She’d rather face certain scorn and ridicule than be forced into a marriage of convenience. Or rather, inconvenience.

He’s avoiding his future…
Betrothed since childhood, Crispin has no interest in wedding the woman he’s expected to marry before Season’s end. The lovely country miss, Jessica Brentwood, holds the key to his heart, though he’s never hinted at his feelings for her.

When they are the victims of a cruel hoax, Crispin isn’t at all unhappy that he’ll have to break his unwanted betrothal to marry Jessica. Except, his betrothed isn’t willing to release him from their agreement, and the vengeful villains who conspired to ruin Jessica and Crispin aren’t finished plotting mayhem.

How can he convince Jessica his rakehell’s reputation is mostly conjecture and that he’s adored her from afar? Dare Jessica believe the scoundrel who swears he’s not a rogue and vows he wants to protect her?

This heartwarming secret admirer historical by a USA Today bestselling author will make you sigh and have you rooting for Jessica and Crispin to outwit those conspiring against them.

If you enjoy reading class differences, lovable rogue, duke, and intrepid heroine love stories with a pinch of mystery, a dash of humor, and gripping emotion, then you’ll adore Collette Cameron’s enthralling SEDUCTIVE SCOUNDRELS SERIES. Buy WOOED BY A WICKED DUKE and settle into your favorite reading nook for a page-turning, entertaining Regency world adventure you can’t put down.

Though this book can easily be read as a stand-alone, most readers prefer to read the series in order.

“One of the best books I have read this year and I have read a lot, had a favourite but this has blown my mind away. Loved loved loved this story.” ★★★★★~Maxine