Blood of Like Souls (A Julie Madigan Thriller Book 1) 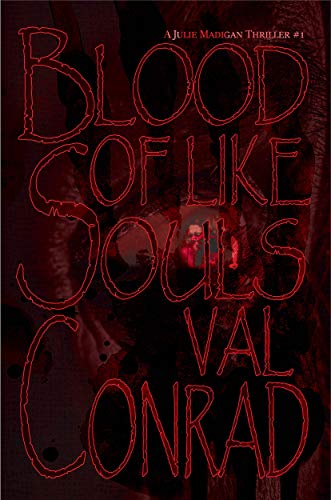 – Learn More
Text-to-Speech and Lending: Enabled
Available on Audible
Enjoy Val Conrad Books? Tell us why and WIN a chance for a FREE ebook!
Here’s the set-up:

Julie Madigan’s career with the New Mexico State Police ended in a puddle of her own blood after having her throat cut, barely able to lift her gun to shoot and kill the man who almost ended her life. But survival led to a year of recovery and left her desperate to hide the scars and to escape her past. She moved to Michigan, away from friends and coworkers who knew her secrets.

Now a Medical Examiner Investigator, Julie Madigan loves her job and her team, but when a killer sends her clues and evidence about two of his victims, taunting her with his unusual methods of murder, she is pulled into a twisted game that eventually targets those she cares about. The killer’s goal – to prove that not only will Julie kill again, but that she will enjoy it as much as he does. While trying to identify him, Julie discovers that this monster has been much closer to her than she ever imagined, leaving her in a race to save the victims he has selected, forcing her to choose who lives and who dies.