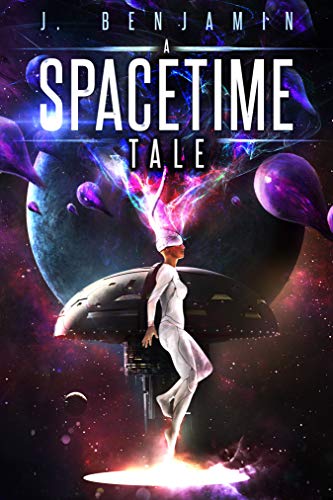 An advanced alien civilization has been discovered and Dr. Kiara Lacroix is called to initiate contact in A Spacetime Tale by J. Benjamin. A high-concept hard science fiction story at its finest." title="

An advanced alien civilization has been discovered and Dr. Kiara Lacroix is called to initiate contact in A Spacetime Tale by J. Benjamin. A high-concept hard science fiction story at its finest.

After years spent studying alien life in the seas of Europa, Dr. Kiara Lacroix has become one of Earth’s foremost exobiology experts. Her research brings her to the attention of the Global Space Federation, which has a top-secret mission for her: an advanced alien civilization has been discovered in the depths of an icy planet five light-years from Earth, and Kiara is expected to join the crew making first contact.

Kiara has her hesitations, but as usual her scientific curiosity gets the better of her. She and her crew will be using experimental technology which establishes long-distance contact via a dream-reality beamed through a wormhole: the spacetime sequence. It’s even riskier than it sounds.

Of course, Kiara’s not the only one with hesitations about the GSF’s actions. And some of those people have the resources—and the access to GSF’s classified mission information—to do something about them.

A Spacetime Tale is high-concept hard science fiction at its finest.