The state of things encourages a reviewer to class “Audience of One: Donald Trump, Television, and the Fracturing of America,” by James Poniewozik, as recommended reading for hiding under the covers or sheltering in place, according to Troy Patterson of The New Yorker… Support our news coverage by subscribing to our Kindle Nation Daily Digest. Joining is free right now! 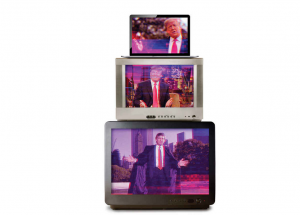 The state of things encourages a reviewer to class “Audience of One: Donald Trump, Television, and the Fracturing of America,” by James Poniewozik, as recommended reading for hiding under the covers or sheltering in place. Poniewozik, who is the chief television critic at the Times, has shaped a study of Donald Trump, the multi-platform character played by a talented charlatan, into a fluid narrative of Trump’s evolution, or metastasis, into the forty-fifth President of the United States. This ridiculous journey plays against a history of the medium that made Trump, as the author analyzes the expansion of television’s forms and norms and business plans. This book is a fine guide to the historic horror show, now screening everywhere, courtesy of the White House pool feed.

The book proceeds from the incontrovertible insight that Trump raised himself on television and weaponized his persona in accord with its values. As a cultural avatar and atavistic figure, he has absorbed, bloblike, the iconic power of characters including Archie Bunker, Walter White, and Rodney Dangerfield in “Caddyshack.” Television trained Trump in his conduct as he pursued money, power, and women, just as it has mediated the desires of its every viewer. The difference, in this book’s persuasive theory, is that Trump and television merged into a symbiotic beast, that Trump is television in human form. The prose, lightly sparkling with argumentation and abundant with choice metaphors, is such that “Audience of One” reads like not just an essential American Studies text but as an epic disaster tale. The surreal catastrophe it describes—of televisions sizzling with mysterious power, of a United States led by what Thomas Pynchon would call a tube addict—is like a Cronenberg take on a doomsday blockbuster, with governmental norms reduced to rubble as if for spectacle sport.