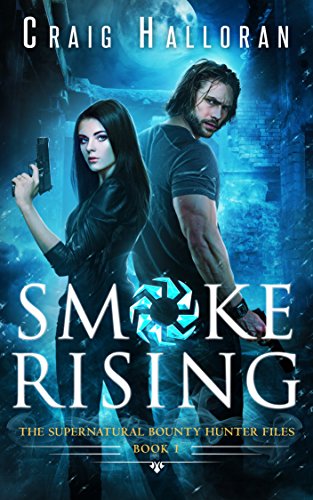 An unlikely pair on a collision course with trouble.

Bounty Hunter John Smoke never liked the rules. As a result of his overly aggressive—and often illegal—arrest methods, he ended up behind bars. But the Bureau wont’ let him be. Placed in the able care of beautiful, no nonsense, Sidney Shaw, his new FBI handler, Smoke needs to alter his loose-cannon ways to remain a free man.

But there is an unchecked evil festering deep in the heart of the nation’s capital. A shadow conspiracy than won’t be defeated by conventional means. A vast, hidden network of criminals with the terrifying ability to shapeshift into monsters is spreading its supernatural sickness in the very fabric of human society.

No ordinary mortal can fight the evil. But, there is nothing ordinary about John Smoke. Sidney Shaw is about to discover for herself as she follows Smoke’s trail into the darkest, most secret corners of Washington, DC. Smoke and Sidney must fight the evil that will stop at nothing to tear them apart while destroying a nation as well.

If you like Jim Butcher’s The Dresden Files and shows such as the X Files and Supernatural, then this dynamic pair is just for you!

“Smoke is like Jack Reacher with a warped sense of humor. Loved all the characters, even the bad guys!” Amazon Reviewer

“What a refreshing author! With perfect twist and turns, and a super sense of humor. I look forward to all his books!” Amazon Reviewer