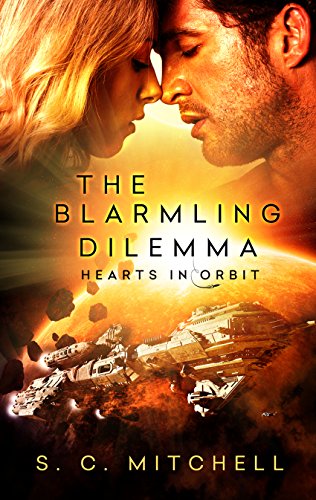 Phoebe Callista’s pleas fall on deaf ears and she’s forced to rescue two helpless Blarmlings from certain death. Fleeing across a backwater sector of the galaxy, with Galactic Marshals in hot pursuit, Phoebe falls into the hands of a handsome but determined bounty hunter.

Rigel Antares has captured wanted criminals throughout the galaxy rim, but he’s never come across anything like Phoebe Callista. The gorgeous blonde is playing the innocent, and something deep inside wants to believe her, but Rigel has problems of his own—a ship that’s falling apart and an unscrupulous Galactic Marshal looking for any excuse to send him back to the prison planets of the Theiler System.

An intergalactic circus, vicious space pirates, and a planet full of backtechers cross their paths as two hearts go into orbit to save a pair of adorable Blarmlings.

Hearts in Orbit — Volume 1: THE BLARMLING DILEMMA is a science fiction romance set in the far-flung space traveling future, and sets a new course across the galaxy that leads to love and adventure.

4½ Stars and a Night Owls Reviews Top Pick: “The Blarmling Dilemma by S.C. Mitchell is a sexy, exciting Sci-fi romance that is also quite adorable. I enjoyed this funny and entertaining read.”