According to the Associated Press, dozens of stocky, bearded men are competing in Key West to see who has the closest resemblance to literary icon Ernest Hemingway. Support our news coverage by subscribing to our Kindle Nation Daily Digest. Joining is free right now! 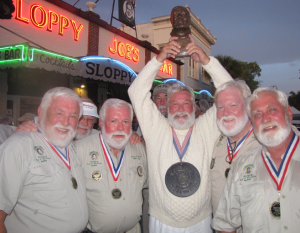 About 135 entered the 39th annual Hemingway Look-Alike Contest, a popular event that is part of the Hemingway Days festival.

The competition began Thursday at Sloppy Joe’s Bar, frequented by Hemingway when he lived in Key West during the 1930s. Participants wore the iconic sportsman’s garb associated with “The Old Man and the Sea” author. The second preliminary round is scheduled for Friday, and the 2019 winner is chosen Saturday.

The festival continues through Sunday, the 120th anniversary of Hemingway’s July 21 birth. Other events include a “Running of the Bulls” spoof, literary readings and a three-day marlin angling tournament.