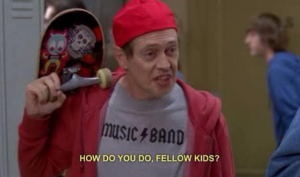 YA readers show up to author signings dressed as their favorite character. YA readers camp out at bookstores, waiting for the midnight release of a beloved series installment. YA readers use their spare time to write fan fiction, make GIF sets, and create blogs with the same fervor people have for pop stars and TV shows.

So it’s no surprise that YA books have some of the most passionate fandoms.

Jonathan Sanchez, cofounder and director of YALLfest, describes the festival as “a chance to be with your ‘tribe’ of fellow Marissa Meyer or Leigh Bardugo or Angie Thomas fans.” Here lines of avid YA readers stretch along the streets of the main historic district of Charleston, South Carolina. “There’s like a whole ‘line culture’—sort of like sneaker fans—where by being in this ridiculous line together you show that you are in a unique but significant group.”

The passion is contagious, but do you have to be 18 and under to enjoy it?

Or are older YA readers doomed to live out this Steve Buscemi meme from 30 Rock whenever they encounter other fans?

The good news is that older YA readers aren’t an anomaly.

There are currently 15.8 million Goodreads members who marked “young adult” as their favorite genre on our site. While only 20 percent of those readers disclosed their age, 65 percent of that sample are 18 and older and 33 percent are above the age of 35. Based on our data, we can infer that older readers represent a healthy portion of the young adult audience, if not the majority.

So while the term “young adult” nods to a specific age group (industry insiders agree the age range for those readers is generally between 12 and 18 or 14 and 19), the category is far more inclusive than you’d think.

“Of course, interest in YA doesn’t immediately stop once someone turns 19,” says Erica Barmash, senior director of marketing and publicity at Bloomsbury Children’s Books. “And there are younger kids reading up as well.”

“Just because a narrative in a YA novel might take place when those characters are teenagers doesn’t mean the experiences represented aren’t relevant to people outside of that age bracket,” says Lindsay Boggs, assistant director of publicity at Penguin Young Readers. “Even as an adult, I often reflect on my teen years. I don’t think I’m alone in that.”