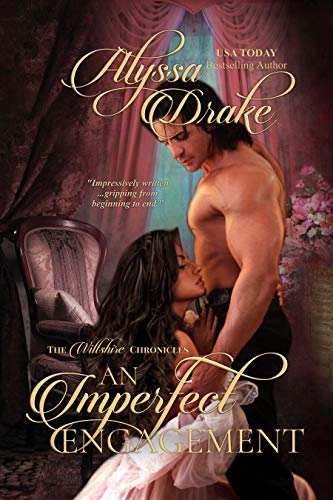 Planning her wedding takes a dangerous turn, when a woman realizes a member of her engagement party would rather kill her than walk down the aisle.

So far, Miss Samantha Hastings’ engagement to Benjamin, Lord Westwood, has been tumultuous at best. Kidnapped by the man who murdered her father, nearly beaten to death, and severely poisoned, Samantha barely manages to escape alive.

When the killer reveals his revenge plot had assistance, the Hastings and Westwood families must band together to defend themselves against a new threat, and Samantha concocts a risky plan to draw the accomplice out of hiding. However, this scheme may cost her more than she is willing to sacrifice. There is a traitor in their midst–one who has already committed murder and is willing to do so again.

The masked ball approaches and, by the evening’s end, at least one more person will die. Will Samantha survive until her wedding day… or will her imperfect engagement become a grizzly prelude to murder?

The second book into this intriguing series drags you deeper into the mystery, surrounding the reader in a dizzying array of passion, intrigue, and the richness of the Victorian era. In the vein of Deanna Raybourn and Amanda Quick, this darker installment of the Wiltshire Chronicles will reveal the violent nature of man.