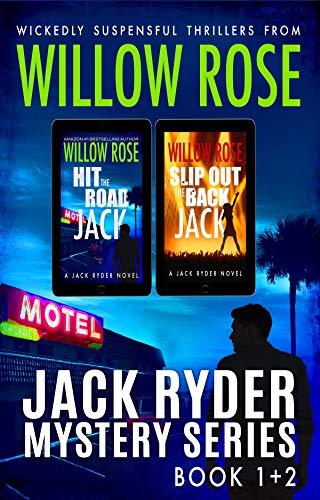 The books have more than 150 raving 5 star reviews!

Ben is supposed to be in school. It’s Monday morning but his parents are still asleep after a night of heavy drinking. Ben waits patiently, even though he knows he is missing out on today’s field trip to the zoo. But, when his black Labrador suddenly runs upstairs and comes down with a finger in his mouth, Ben knows he’s not making it to school today at all.

Detective Jack Ryder is chaperoning his kids’ field trip when he gets the call from the head of the Cocoa Beach Police Department. A body has been found and they need his help. Soon, Jack finds himself up against a killer, a predator who ruthlessly chases women and kills them so they can never leave him. The case soon causes serious consequences for him and his family once the truth is revealed.

With her new hero, Jack Ryder, as a loving father and committed detective, a new location in tropical Florida, and a story that moves at an incredible pace, Hit the Road Jack is Willow Rose at the top of her game.

– SLIP OUT THE BACK JACK:

They take turns with the knife, cutting their thumbs open. A drop of blood lands on the dark wooden table. Eyes meet across the room. All four thumbs are pressed against each other one by one. Blood is shared, secrets buried.

Years later a brutal madman sprays bullets into a crowd at a movie theater in Miami and sends a chill through the entire nation. When human remains are discovered in the dense forest next to a biking trail in Brevard County, it is only the beginning of a series of gruesome murders, which will shock the entire Space Coast.

Detective Jack Ryder is preoccupied with Shannon King and the strange email she has just received that leaves her terrified just as she prepares to go on stage at the Runaway Country Festival. Jack Ryder senses the connection and soon he realizes he is on the hunt for a serial killer with a killing spree that spans over more than a decade.