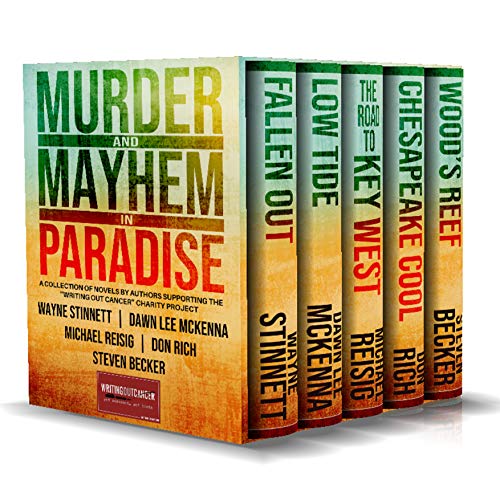 “This is a great set of books by a group of independent authors, each with their own cancer experience, who have put the box set together both to help fund cancer research and to try to educate the public on the need for each of us to take care of our own testing.” – Amazon Five Star Review

Fallen Out – Wayne Stinnett
When Jesse McDermitt retires from the Marine Corps at age 37, he has no idea what he will do for the rest of his life. He only knows he doesn’t want to spend the coming winter anywhere cold. His greatest skill is killing people from up to a mile away and he knows there aren’t many job opportunities in the civilian world for that.

Danger lurks in the sleepy little town of Marathon, in the middle of the Florida Keys, as well as in the swamps of the Everglades. But danger doesn’t expect to run into a man like Jesse. A man who will not only respond swiftly in facing it, but with a vengeance unexpected.

Lt. Maggie Redmond is called to a crime scene on St. George Island, where she is met with the body of Gregory Boudreaux. The medical examiner calls it a suicide, but no one knows that Maggie has a horrible connection to the dead man.

When Gregory’s uncle, Bennett Boudreaux, the richest and scariest man in town, takes a sudden interest in Maggie, people start to wonder, Maggie included. Maggie knows he may suspect her of killing his nephew, but she finds herself slowly drawn to the man.

As Maggie fights to help a young girl escape the clutches of a volatile drug dealer who’d love to see Maggie dead, she also struggles to hide her dark link to a dead man, and her burgeoning relationship with her boss, Sheriff Wyatt Hamilton.

Unfortunately, secrets have a way of revealing themselves at low tide.

The Road to Key West – Michael Reisig
The Road to Key West is an adventurous/humorous sojourn that cavorts its way through the 1970s Caribbean, from Key West and the Bahamas, to Cuba and Central America. In August of 1971, Kansas Stamps and Will Bell set out to become nothing more than commercial divers in the Florida Keys, but adventure, or misadventure, seems to dog them at every turn. They encounter a parade of bizarre characters, from part-time pirates and heartless larcenists, to Voodoo bokors, a wacky Jamaican soothsayer, and a handful of drug smugglers. Adding even more flavor to this Caribbean brew is a complicated romance, a lost Spanish treasure, and an antediluvian artifact created by a distant congregation who truly understood the term, “pyramid power.” So pour yourself a margarita and slide into the ’70s for a while, as you follow Kansas and Will through this cocktail of madcap adventures – on The Road To Key West!

Chesapeake Cool – Don Rich
Casey Shaw wasn’t looking for love nor trouble when he moved from South Florida to Virginia’s Eastern Shore. He knew he’d have his hands full just renovating the defunct waterfront hotel and marina. However, there was something about Sally, the airport manager, that captured his attention and he wanted to find out more about her. But he’d really need to focus on his new property because the internet auction neglected to mention that it came with its own drug smuggling murderer.

Wood’s Reef – Steven Becker
It’s easy to become invisible in the Florida Keys. Mac Travis was doing his best to keep a low profile: diving, fishing, and enough salvage work to pay his bills. It’s a good life until he discovers something while spearfishing that could change the pristine Keys forever. His drunken crewman soon lets out the secret and his life is instantly changed. A corrupt presidential candidate will do whatever it takes to hide his secret. An exiled coke dealing terrorist sees this as his opportunity to redeem himself. A local con man loyal only to himself is looking for a quick payoff. When Mac’s friend and mentor is injured, his estranged daughter reluctantly comes to his aid.