Say it with a Kiss 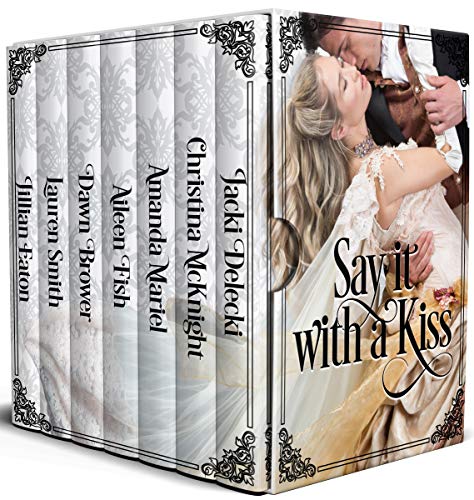 A Code of Heart by Jacki Delecki
Miss Amelia Bonnington has been in love with Michael Harcourt since she was nine years old… or so she thought until a not-so proper impassioned and unyielding kiss from the not-so honorable and equally disreputable Mr. Derrick Brinsley, gave her reason to question the feelings of the heart.
Derrick Brinsley, brother to the Earl of Falconbridge, shunned from society for running off with his brother’s fiancée, hasn’t cared about or questioned his lack of acceptance until meeting the beguiling Amelia Bonnington. One passionate moment with the fiery Miss Bonnington has him more than willing to play by society’s rules to possess the breathtaking, red-haired woman.
On clandestine assignment to prevent the French from stealing the British Navy’s secret weapon, Derrick must fight to protect British secrets from falling into the hands of French spies, but also the chance at love with the only woman capable of redeeming him.

The Disappearance of Lady Edith by Christina McKnight
One tragic night changed sensible, proper Lady Edith Pelton’s life: when her best friend fell to her death, pushed down a flight of stairs by a nefarious lord. Now, Edith dedicates her time to watching the man she thinks is responsible, while gathering information to expose other scoundrels posing as gentlemen of honor about London. When her spying is noticed by a perfect stranger, Edith finds herself with two mysteries–what happened to her friend, and how to win the heart of this brilliantly handsome lord.

Scandalous Endeavors by Amanda Mariel
The Duke of Goldstone is devilishly handsome, and has a nasty habit of showing up at all the wrong moments and thwarting Amelia’s carefully laid plans to ensnare a suitable husband. Sparks fly as the pair find themselves at odds with each other and drawn to each other at the same time. Can they find a way to stop arguing long enough to explore their growing passion?

Her Impetuous Rakehell by Aileen Fish
Laurence Pierce never wanted a wife or children. He preferred his freedom and his bachelor’s rooms in London. Then his cousin Lord Oakhurst dies, making Laurence guardian of a three-year-old girl. He knows nothing about children, and even less about girls. In desperation, he turns to the only lady friend he’s never seduced and begs for help.
Lady Hannah Lumley knows Laurence for exactly what he is, since he’s been her brother’s closest friend for as long as she can remember. He’s the last man she could imagine as a father, and the very last man her brother would consider letting her marry. Yet one little kiss leaves her unable to think of anything but the new Baron Oakhurst. Now her Season has taken a twist she never expected. How can the nice young lords and gentlemen in London ever compare to this impetuous rakehell?

Infinitely My Marquess by Dawn Brower
The Marquess of Cinderbury and Lady Annalise Palmer are two lost souls in search of salvation. Together they can help each other heal, if they can believe in love, and in each other long enough to escape the torment they’ve both suffered; as well as, uncover an unimaginable devotion.

The Rakehell’s Seduction by Lauren Smith
Notorious rake Ambrose Worthing takes on a bet to seduce an earl’s daughter and gets more than he bargains for when he meets Alexandra, the feisty country girl who might just warm up his cold heart.

Lady Harper by Jillian Eaton
High-spirited, independent, and rebellious, Lady Harper has no intention of finding a husband. And why should she, when every man she’s ever met has bored her to tears? That is, every man except for one…
The Duke of Greenwood may be many things – arrogant, rakish, and a cad, to name a few – but boring he isn’t. After a chance encounter with Harper leaves him entranced, he vows to make her his wife…The only problem? She can’t stand the sight of him.