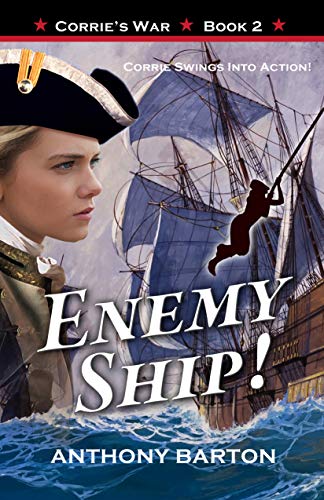 SAIL THE SEAS IN THIS ACTION-PACKED NAVAL ADVENTURE OF HISTORICAL PROPORTIONS
Join the brave women and men who served in Nelson’s navy! England and France have declared war, and Corrie Harriman joins in on the action. Corrie’s War is a sixteen-part naval adventure series where Corrie joins the Royal Navy and must combat deadly enemies, navigate through hazardous storms, and even endure cruelty by the hands of her own crew. No one suspects that Corrie is actually a young woman—and she plans to keep it that way.
In Enemy Ship!, James battles a French captain aboard a hostile ship and Corrie must save him from impending doom. In Clear for Action! (Book 3), Corrie is promoted to watch officer and in charge of the warship, but encounters the enemy in her path. She must decide whether or not to engage, which could cost the lives of the men, women, and children on the frigate. Outgunned, Swift has a skirmish with the French warship Tonnerre in Under Fire! (Book 4), but can Corrie’s plan save her crew from defeat?
Many fine stories have been written about the men who fought in the Royal Navy against Napoleon, but many authors of such stories have ignored the courage and long years of service of the brave women who fought alongside them.

Why have previous authors of naval dramas neglected the women?

I’m not sure, but I think it may be because in Corrie’s time, the public was supposed to believe the Navy was for men alone. This meant that if you were a woman and you wished to serve in the navy, then you had to dress yourself as a man. If you would not dress like a man or if you refused to pretend that you were a man, then the ship’s purser would not pay you your working wage, which was sixpence a day.

Now Corrie was young enough when she was press-ganged into the service to pass for a man, and she found a ready supply of men’s clothes in the ship’s slops chest, so she lost no time in disguising herself. Not all of the crew were fooled by her disguise, and the ship’s Master-at-Arms, a scheming fellow by the name of Sly, set out to make her life as miserable as possible.

But Corrie was lucky. She found a friend and ally in the Captain of the Maintop, an escaped slave named Billy Brown, who offered to show her the ropes and help her keep Sly at arm’s length. Corrie was grateful for this but a little puzzled. Was Billy Brown a man or a woman? With everybody in the ship’s company dressed in men’s clothes, it was hard to tell.