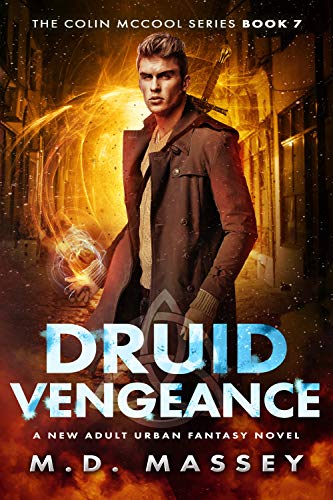 When a wizard tasks Colin McCool with saving his world from a post-apocalyptic future, he’ll stop at nothing to complete his mission. With the clock ticking down to oblivion, Colin must face an army of vampires and a power-crazed magician—one who could end the young druid and his world, forever…

I’ve seen a lot of crazy stuff since I got clued into the paranormal world. Cannibalistic giants. Necromancers who could raise armies of the undead. Evil nature deities with an appetite for destruction. Old gods, and new.

But nothing prepared me for seeing the world descend into an undead apocalypse, in a future so bleak it gives me chills just telling you about it. Millions of lives, gone in the blink of an eye, and millions more turned into zombies, ghouls, revenants, and vampires.

In that future, humans are no longer at the top of the food chain. I know this because I was there. This crazy fae chronomancer took me there, right after my girlfriend broke up with me by throwing me through the windshield of a rare and expensive British sports car.

And it wasn’t even my car—I’d borrowed it from my best frenemy, Crowley.

The good news is, that future hasn’t happened yet. But it damn sure will come to pass, if I don’t find a way to stop it.

Now I’m chasing after a mad, power-hungry magician who stole an artifact so deadly, it was once used to kill a god. This jackass is in league with a coven of evil vampires, and I have it on good authority that they’re the ones who trigger the apocalypse.

So, all I have to do is fight my way through an army of deadly, elder vamps, and wrench one of the world’s most destructive magic artifacts from a wizard so powerful, he makes me look like a two-bit street magician.

Plus I have to find a way to get my girlfriend back, all while the clock is ticking on a countdown to Armageddon.

I wonder, do they sell apocalypse insurance? Because the way things are looking, I might just want to take out a policy…