THE SHAWCROSS LETTERS: My Journey Into The Mind Of Evil 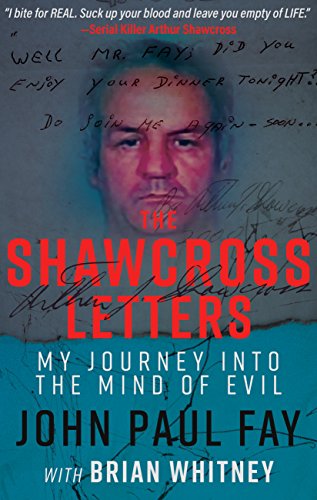 – Learn More
Text-to-Speech and Lending: Enabled
Enjoy Brian Whitney’s Books? Tell us Why and Win a Free Book!
Don’t have a Kindle? Get yours here.
Here’s the set-up:

What happens when one of the most evil men in the history of America meets a man he trusts to share his darkest secrets with? How does it affect someone already on the edge of society when he is taken under the wing of a serial killer? Partly told through the letters of Arthur Shawcross, THE SHAWCROSS LETTERS is the tale of one of America’s most notorious serial killers and his relationship with his would-be biographer, John Paul Fay.

John Paul Fay was a murderabilia dealer with a troubled past. Arthur Shawcross, also known as the Genesee River Killer, was in prison after being convicted of murdering numerous women, he officially has killed 14 people in all. The two created a business relationship, with Fay shopping the drawings of Shawcross and working with him on a book of his life. They also created a bizarre friendship in which Shawcross would let out his darkest secrets and Fay would finally meet someone that he himself felt oddly at home with. But as we all know, be careful what you wish for, you just might get it.

“THE SHAWCROSS LETTERS is a graphic and dramatic page turner that delves into the twisted mind of a serial killer. A true crime book that will horrify, enlighten, and keep you up at night.” Joseph Souza-Author of The Neighbor.