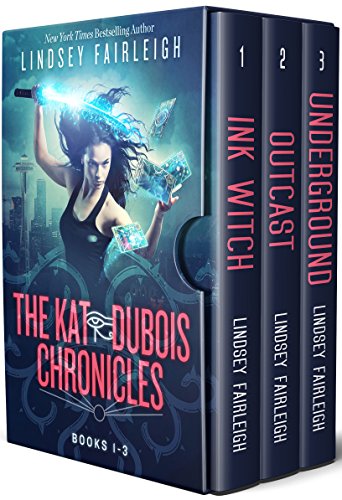 – Learn More
Text-to-Speech and Lending: Enabled
Follow author Lindsey Fairleigh on BookGorilla
Don’t have a Kindle? Get yours here.
Here’s the set-up:

The gods are gone. Her brother is missing. One retired assassin must confront her past to save his future…

Immortal Kat Dubois has traded in her sword for a flask. Hard drinking helps ease the grisly memories of her former trade: an assassin of immortals. She’s perfectly content to spend eternity in her Seattle tattoo parlor…until the mysterious disappearance of her brother finally brings her out of retirement.

With a charmed deck of tarot cards and her trusty sword, Kat sets off to track down her brother and save his soul. A wicked corporation and a laundry list of old rivals stand in the way of her quest. For someone with an eternity to live, Kat’s chances of unraveling the mystery become less likely with each passing second…

Ink Witch is the first book in a new standalone series of urban fantasy novels set in the Echo Trilogy universe. If you like gritty paranormal settings, Egyptian mythology, and flawed characters, then you’ll love Lindsey Fairleigh’s fast-paced adventure.

“… Character-wise, Lindsey Fairleigh gets it right, but the world (Nay, universe. Really, an actual universe.) she’s created is just as remarkable…” 5 star review