“I have seldom come across a more forensically researched book about a serial killer, helped by the author’s remarkable access to the man himself. William Howell is a monster – but when in conversation with Anne Howard, he becomes a pliable witness to his own grizzly life story. His testimony and confessions to her were comprehensive and revelatory – neither the Police nor his own lawyers got the full story of Connecticut’s worst serial killer – Anne Howard did.” – Will Hanrahan, TV Producer, BBC, Netflix, A&E, Discovery ID.

HIS GARDEN: Conversations With A Serial Killer 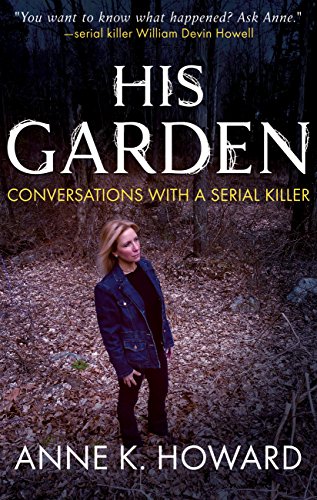 – Learn More
Text-to-Speech and Lending: Enabled
Don’t have a Kindle? Get yours here.
Here’s the set-up:
“You want to know what happened? Ask Anne.”—serial killer William Devin Howell

A monster was on a killing spree. In just nine months, seven people went missing; all of their bodies eventually discovered in a wooded lot behind a suburban strip mall. But the investigation that led law enforcement to their suspect, William Devin Howell, is only part of the story behind HIS GARDEN: Conversations With A Serial Killer.

A practicing attorney, author Anne K. Howard first contacted Howell while he was serving a fifteen-year sentence for the murder of one of his seven victims. He was about to be charged for the remaining six murders. A unique and disturbing friendship between the two began, comprised of written correspondence, face-to-face prison visits and recorded phone calls. Howell, who had been unwilling to speak to any members of the media, came to trust Howard.

In the years that follow, the suspect shared his troubled history with Howard but refused to discuss the charges against him, promising only to tell her everything when the case was over.

That time has come.

HIS GARDEN probes the complicated and conflicted mind of William Devin Howell–Connecticut’s most prolific serial killer. Both sacred and profane in its narrative style, the story on these pages explores the eternal question of human evil and its impact on others, including the woman he chose to hear his horrific confession.