With This Ring (Windswept Bay Book 6) 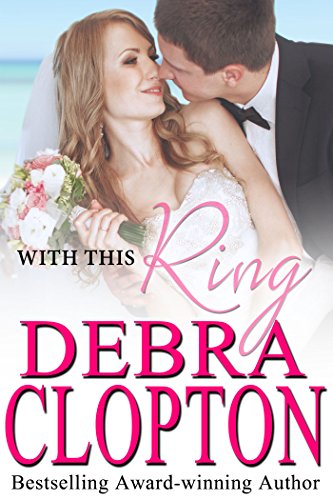 4.6 stars – 205 reviews
Kindle Price: FREE!
Everyday Price:
Text-to-Speech and Lending: Enabled
Enjoy Debra Clopton’s Books? Tell us Why and Win a Free Book!
Don’t have a Kindle? Get yours here.
Here’s the set-up:

After her small son, Kevin, asked both God and Santa for a new daddy for Christmas, and then didn’t find him under the tree, school teacher, Jessica Lyons is starting the new year out with a very unhappy six year old on her hands. Kevin can’t understand that she’s only been a widow for 2 years and she can’t imagine marrying again—not yet at least. But, unknown to her Kevin has a plan and has decided that if God and Santa won’t give him what he wants then maybe the police can!

When the very handsome Chief of Police, Levi Sinclair shows up as Kevin’s Show-and-Tell he believes, as does Jessica, that her son has asked him there to show him off as the “police chief”—it’s a little awkward when Kevin introduces Levi as his next daddy!

Things are getting a bit complicated on the shores of Windswept Bay! Come join the fun in With This Ring book 6 of this captivating series. You’ve watched the four Sinclair sisters fall in love now it’s time to watch the five Sinclair brothers find the women of their dreams.

“Another great book by author Debra Clopton. This books is funny, witty, and will bring tears to your eyes. Her character are well developed, and there is nothing stagnant about her books.” 5 star review