Rolled out in 2013, the Mayday video chat feature gave Fire tablet users access to a live rep on screen who could control and annotate the screen for assistance. Todd Bishop from GeekWire looks at the quiet demise of a feature that the company had touted as a revolution in on-device tech support. 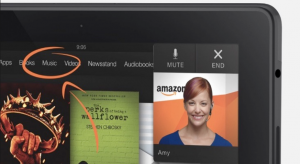 Amazon is pulling the plug on its Mayday video calling feature for on-screen customer support on its Fire tablets, ending a service that was personally unveiled by Amazon CEO Jeff Bezos nearly five years ago.

“The Mayday video calling service will be discontinued in June 2018,” the company says on a customer support page spotted by GeekWire this morning. The announcement, which hasn’t been widely noticed, represents the quiet demise of a feature that the company had touted as a revolution in on-device tech support.

The updated support page notes that users will still be able to contact Amazon customer service through phone, email or chat, and the representative on the line will have the option of using Mayday screen-sharing to help with problems.

However, the signature feature of the service was the ability to press the Mayday button to summon a video chat with a customer support representative who had the ability to control the device and annotate the screen. For purposes of privacy, the company said the rep wasn’t able to see the user on the other end of the chat.