To Capture Mr. Darcy: A Pride and Prejudice Variation Novel 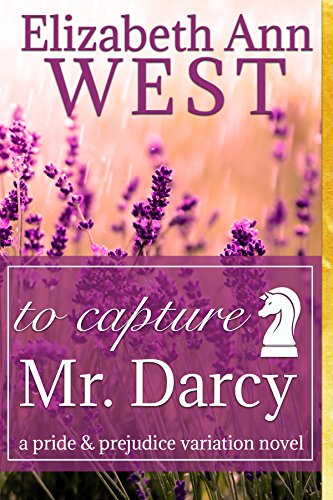 Nature’s a fickle thing. When four days of rain occur earlier in Jane Austen’s Pride & Prejudice to trap Jane and Elizabeth Bennet at Netherfield Park, new romances, misunderstandings, and alignments are made. Volatile tempers never did well cooped up together. Not even when there’s a chessboard to help pass the time.

Fall in love with the romance of Mr. Darcy and Elizabeth Bennet all over again in this new variation by author Elizabeth Ann West. A stand-alone novel of over 300 pages in paperback, this story is sure to make you sigh and swoon many times over!

Elizabeth Bennet slipped into the library at Netherfield Park for her sixth time in three days. With her sister Jane on the mend, she could not cease her curiosity for the chessboard. As soon as Jane fell asleep, she left her sickbed to check the progression of the game with her unknown opponent.

Beneath the expansive double set of windows, looking out on the south side of the property, sat the rosewood carved chess set. Elizabeth spied the board on her first afternoon in the grandest estate in all of Hertfordshire. She had not meant to start a game, with anyone, but resisting the urge to move a single white pawn proved to be too great a temptation. Returning a few hours later to replace the novel she had finished by Jane’s side as her sister lay suffering with fever, Elizabeth stood stunned to find someone had responded in kind. Black’s corresponding pawn rested two squares away from the starting line to face hers. Soon Elizabeth found herself eager to return to the library every few hours to continue the clandestine game.

The board stood deep in the throes of a true battle with black’s knight decimating her numbers. The most clever Bennet daughter carefully read the positions of her pieces and considered her options. Her mysterious opponent was of the aggressive sort, but not blinded by the taking of just any piece. She had offered up both a pawn and a knight and the opponent did not fall distracted by the easy kill. Therefore, the only way to beat him or her was to lay a trap of the wickedest kind; Elizabeth would sacrifice her queen in four moves.

Smiling to herself, she chose her move and a calling voice from outside the library made her hastily select another novel. Perhaps a servant was looking for her and Jane had not slept long? Either way, her bishop sat ready to take the opponent’s offending knight and she would have to wait to see the next move of her anonymous enemy.

Mr. Fitzwilliam Darcy of Derbyshire frowned when he noticed Elizabeth Bennet leaning over his chess game with Bingley. She had not noticed him sitting solitarily in the far corner with his book and brandy. Being a master at averting the attentions of Miss Bingley granted him an ability to turn into proverbial wallpaper when he willed it so. A swirl of the amber liquid kept him occupied as he sat astounded the woman would dare to move the pieces of a game she was not a party to!

He had meant to say something, but too quickly she moved a piece and then scurried out of the library, leaving him once more to his own company. Groaning, he finished his drink and supposed he could set the board back to the last position. One gift he held included memorizing even the slightest glimpse of a picture. Darcy felt confident he could reset the piece she dared touch, but when he reached the board, he paused. She had not moved a piece randomly. She had made a very cunning move forcing him to choose between sacrificing his knight or his rook!

A knot of understanding twisted tighter in his gut. That he was already in very grave danger of more than a passing fancy with this dark-haired, bright-eyed creature was a foregone conclusion, but now he was in the thralls of a very thrilling chess match with a worthy opponent. And the worthy opponent was none other than that dark-haired, bright-eyed creature Elizabeth Bennet.