Are people no longer buying new e-readers anymore and reading on their smartphones and tablets? Is it simply the case of e-readers not being trendy or hip anymore? What’s with the growing animosity? Michael Kozlowski from Good E-Reader takes a look at these questions and whether eBooks and physical books can live together in a harmonious world: 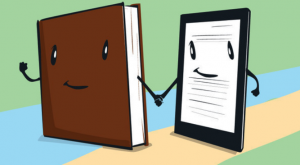 Tom’s Hardware believes that e-readers are catering to a diminishing audience. “More than one-quarter of U.S. adults read no books in 2016; of the 74% who did, some read a single book “in part.” The average U.S. reader finishes from four to 12 books per year, depending on whether you want to go with the median or the mean. The number of people who read, and the amount that they read, have both been steadily decreasing since the early ’80s.”

The vast majority of media websites do the odd piece on e-readers how they are declining. This is prompted for a myriad of reasons. Sometimes Pew Research does an annual piece on hardware ownership and e-readers are at the bottom. The American Bookseller Association and Nielson always write a series of reports on how ebook sales are falling and print is doing well, it might be people buying print, at the expense of ebooks, ergo e-readers are dead!

I follow the e-reader industry closer than most. I know about all of the emerging e-paper technologies that are being developed by Clearink, E-Ink and Plastic Logic. First hand I recognize that Clearink is not ready for prime time and Plastic Logic is literary begging people do do business with them, but no e-reader company has taken them seriously. E-Ink is the de facto industry leader and they have little incentive to innovate, because who are they competing against? Competition always prompts innovation.

Personally I think e-readers are going to be around for a longtime. They are not as trendy and popular as they once were in 2009 and 2010 when they were new and the concept of reading books digitally was very compelling. E-Readers started out as niche devices, got popular for a few years and now continue to be niche. There are thousands of reasons why you should be reading on an e-reader, no glare from the sun or blue light from the screen. e-Readers batteries last a long time because power is only generated when the state of a screen changes, which means it will outlive your smartphone or tablet.

1 thought on “<p style="text-align:center;font-weight:bold;">Can’t we all just get along? The growing negative sentiment towards e-readers</p>”