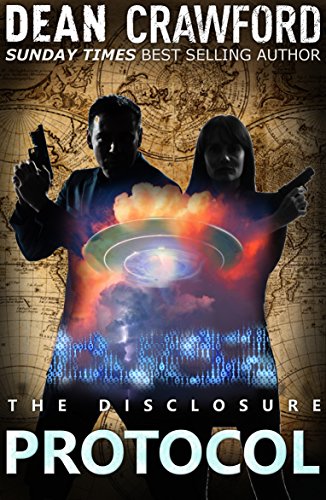 – Learn More
Text-to-Speech and Lending: Enabled
Don’t have a Kindle? Get yours here.
Here’s the set-up:
Upon the lonely moors of Scotland a youth is stabbed to death while investigating mysterious lights in the night sky. When police capture his killer they make a startling discovery: he speaks nothing but medieval English and his blood carries DNA that matches samples from the 15th Century. Hours later, amid more strange lights, the man vanishes from within a locked police cell, never to be seen again.

In the United States, the CIA is being held to ransom. Perfectly focussed images of Unidentified Flying Objects are being sent to Langley with a demand: provide full disclosure of what the government knows about UFOs or these images will go public.

Struggling with the task of identifying the perpetrators of the images, and aware that they must somehow know when and where UFOs will appear, the CIA sends General Scott Mackenzie in search of Ethan Warner and Nicola Lopez, the only known former US agents with the skills to track down the perpetrator. His mission; obtain the technology that is allowing someone to predict when and where UFOs will appear and ensure that nobody else can access it.

But as the investigation unfolds, so Ethan and Nicola learn that the Russians are also seeking the same technology. As a race against time develops to get the upper hand, victims of strange abduction events implore the government for help, including the parents of a seven-year-old girl who is suffering seizures and post-traumatic stress from her experiences.
From the Indian Ocean to the lonely deserts of Utah, Scotland to Nevada, Ethan and Nicola discover the startling truth about alien abductions and UFO sightings, and realise that full disclosure isn’t about UFOs at all: the knowledge the CIA possesses will change the course of human history…