The People’s Necromancer (The Age of Magic Book 1) 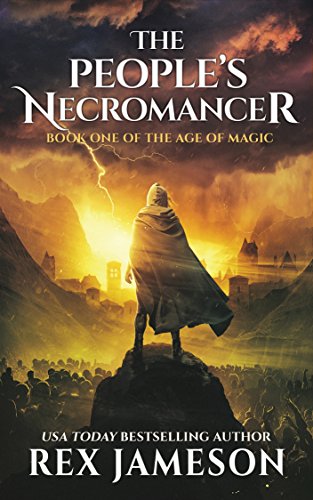 Craving a complex, daring Sword and Sorcery / High Fantasy? The Age of Magic series is reminiscent of the emotional roller coaster and grit of Game of Thrones with the wonder and danger of the upside-down from Stranger Things!

Amidst the darkest days of antiquity, mankind discovers a new kind of hero.

For thousands of years, mankind warred without magic. Peculiar abilities were buried in history along with the storied paladins and the mysterious dark elves who rarely ventured into human towns.

That all changes at the end of the Tranquility Era, when a young man named Ashton accidentally raises his murdered best friend Clayton from the grave. Because of his mistake, Ashton becomes the focus of manhunts, armies, and the King’s judgement, but Ashton is not the biggest problem in the Kingdom of Surdel.

The golden age of man is coming to a close and enemies surround the civilized world. Lulled into a false sense of security by isolation and pervasive peace, human lords hatch petty schemes to weaken their rivals and gain favor with the throne. Meanwhile, an ancient darkness stirs beneath the Great Northern Mountains and the orcish hordes grow restless just beyond the Southern Peaks. Out of the chaos at the end of the Tranquility Era, a new breed of hero arrives to forge an age of sorcery and mayhem. And into this chaos comes the Necromancer!

Enjoy Rex Jameson’s Books? Tell us Why and Win a Free Book!