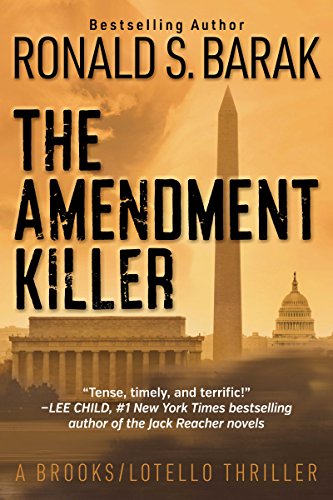 4.7 stars – 79 reviews
Kindle Price: $1.99
Everyday Price:
Text-to-Speech and Lending: Enabled
Available on Audible
Don’t have a Kindle? Get yours here.
Here’s the set-up:

“One of the year’s best legal thrillers. Fans of Scott Pratt and Lisa Scottoline may find a new favorite author in Ron Barak.” –Best Thrillers Magazine

“This novel should come with a warning: addictive reading ahead. It’s as good a legal thriller as I’ve read this year.” – John Lescroart, author of a dozen New York Times bestselling novels

” THE AMENDMENT KILLER is a high-speed, tense political thriller about one of today’s most fundamental issues, the integrity of our Supreme Court.” – Andrew Gross, #1 New York Times bestselling author of The One Man

” Ron Barak is a writer to watch.” – Anthony Franze, author of The Outsider

“Barak matches Grisham step for step. He had me turning the pages of THE AMENDMENT KILLER from the first page to the last. I thoroughly enjoyed the ride.” -Dennis DeConcini, United States Senator, Ret

“A legal thriller with a tense drama where the stability of the government hangs in the balance. It’s timely, tense, and a perfect read in these uncertain times.” -John M. Murray (Foreword Reviews)

“WE HAVE YOUR GRANDDAUGHTER. HERE’S WHAT YOU NEED TO DO.”

That’s the text message Supreme Court Justice Arnold Hirschfeld receives as hearings commence in the U.S. Supreme Court to determine the fate of the 28th Amendment – enacted to criminalize abuse of power on the part of our political representatives.

In the meantime, Hirschfeld’s precocious and feisty 11-year-old diabetic granddaughter Cassie, brutally kidnapped to control her grandfather’s swing vote upholding or invalidating the amendment, watches her insulin pump running dry and wonders which poses her greatest threat, the kidnappers or the clock. As Brooks is forced to choose between saving our nation or saving the girl.

Enjoy Ronald S. Barak’s Books? Tell us Why and Win a Free Book!
Authors and Publishers: How to Sponsor Kindle Nation Daily