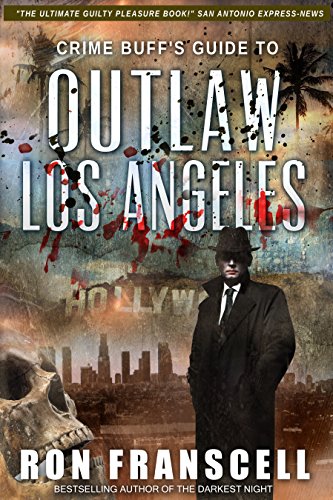 A sunset cruise through a place where ordinary inhumanities are entertainment—with GPS coordinates, photos and more!

Los Angeles is where America’s dreams and nightmares got all tangled up. In this otherworldly place of seemingly everlasting life, death could have an otherworldly quality, too. In a city where anything was possible, even the ghastly could happen. Where else does a list of a city’s top five most recognized citizens include a mass murderer? Stand in the footsteps of Manson, the Hillside Strangler, the Night Stalker, the Black Dahlia’s killer, and the Onion Field slayers. Visit crime scenes where Hollywood’s weird history took fatal turns for O.J. Simpson, John Belushi, Ramon Novarro, Phil Hartman, Dorothy Stratten, Sal Mineo, and so many others.

OUTLAW LOS ANGELES continues the series that critics, true-crime fans, historians, and travelers have hailed as “thorough and unflinching” and “the best damn crime travel series ever published!” Dozens of fascinating stories in OUTLAW LOS ANGELES are told in the same fast-paced, enthralling voice that’s made Ron Franscell one of America’s most beloved crime writers … and the Crime Buff’s Guides a three-time winner of TrueCrimeZine.com’s Book of the Year!

Enjoy Ron Franscell’s Books? Tell us Why and Win a Free Book!
Authors and Publishers: How to Sponsor Kindle Nation Daily