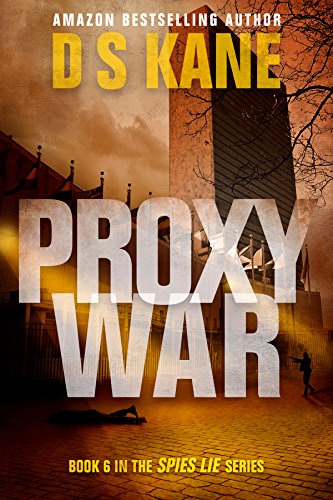 When you’re an international spy, who said dying was easy?

Yigdal-Ben-Levy used to be the Mossad spymaster, but now he’s Israel’s Assistant Foreign Minister in D.C., exiled and long out of the game of spying. Diagnosed with terminal stomach cancer, he’s waiting to die when he stumbles across a Chinese-Russian plot against the United States. Despite opposition from his Prime Minister, Ben-Levy decides to present his suspicions to the UN General Assembly after the President rejects his intel.

Unfortunately, the UN is in New York City, nearly 300 miles away; a journey filled with Russian and Chinese assassination teams, cyber-attacks that threaten US communications, and a violent snowstorm that has closed airports and made the roads treacherous. Ben-Levy still has some operatives he can rely upon, but it’s a threadbare team: Jon Sommers, Cassandra Sashakovich, Avram Shimmel, William Wing, and a few others. Not enough to stop the world war that’s about to happen.

The risk? Monumental. The cost if they don’t succeed? A Chinese takeover of America’s power grid, followed by a military invasion and a division of US land down the Mississippi. With enemies on all sides and the cancer spreading, it will take everything Ben-Levy and his team of spies has to warn the world of the impending war.

“The latest adventure in a series that only grows more engaging with each installment.” –Kirkus Reviews

“Mr. Kane saved the best for last, of course he left open the next installment. And he brought back accidental spy Jon Sommers to finish things up. Please write fast Mr. Kane so we can see what happens next!” –Richard  L. Cooper, Amazon Reviewer