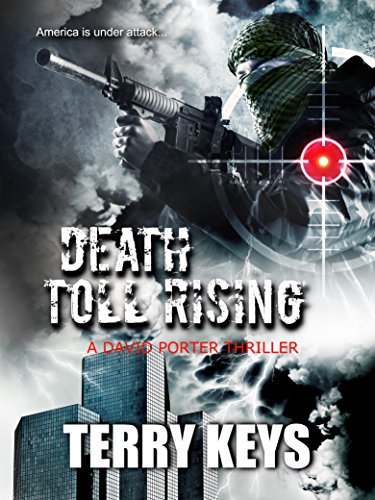 Psychological thriller for the ages, fab read will want to read more of this author, at one point I could not read quick enough I was that engrossed (Amazon Customer)

A gripping thrill ride in the tradition of Brad Thor, Vince Flynn, James Patterson, Jack Reacher and Harlan Coben, Death Toll Rising will keep you up all night! HBO’s Homeland on steroids! The suspense will push you to the edge!

US President Jackie Wilson fresh off her election victory wasted no time pushing for the change her campaign promised. World leaders descended to her hometown of Houston, Texas to attend the first World-Wide Religious Summit. As the eve of the summit approached Japan’s Prime Minister, Akio Yoshida, suddenly falls dead… murdered in Houston’s Chinatown. His final moments had been broadcast live for the entire world to see. During the stream a chilling death threat was made to the remaining world leaders and America was named as the mastermind behind the terror sending shockwaves across the globe. Leaping into action the FBI, CIA and Homeland Security attempt to pursue the real murderers but are left with no clues, no leads and ultimately no direction. As promised the following day at noon another world leader suddenly dies. In a desperate attempt to restore order to chaos, HPD Detective David Porter and his team are summoned to help with the case. As global panic sets in and the world begins to lose patience as the possibility of nuclear Armageddon lurks in the shadows.
With everyone paralyzed by fear and time quickly running out, the fate of earth as we know it hangs delicately in the balance. The world could be coming to an end… no one wanted to watch… but no one could look away… The war on terror has reached home…

“Another hit by Terry Keys! Riveted to my Kindle for 2 days reading this high-octane political thriller. Detective David Porter and his team are thrown into a terrorist plot involving the White House. Front page news. Action, twists and tension abound. Chewing my nails during this book. I was pleasantly surprised to read of Secret Service agent McFarland, who was leading her FBI team in the investigation. It brought tears to my eyes. Looking forward to the next book! Great job, Terry!” – Amazon Verified Purchase Five Star Review

Enjoy Terry Keys’s Books? Tell us Why and Win a Free Book!