Tears of the Silenced: A True Crime and an American Tragedy; Severe Child Abuse and Leaving the Amish 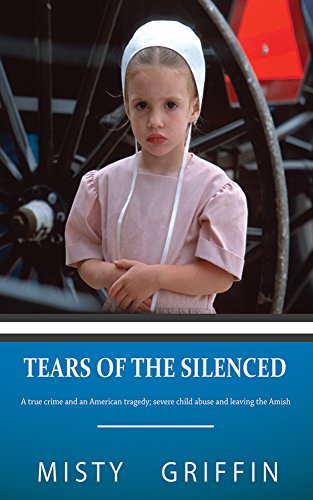 – Learn More
Text-to-Speech and Lending: Enabled
Don’t have a Kindle? Get yours here.
Here’s the set-up:
In 2016 the Amish bishop that sexually abused the Author was finally sentenced to 10 years in prison for molesting almost all of his 11 children-Two years after Misty published her memoir Tears of the Silenced. The detective who investigated the bishop was reading Tears of the Silenced when he was called out on the case.

When I was six years old, my family started to live and dress like the Amish. A few years later we moved to a mountain ranch where my sister and I were subjected to almost complete isolation, sexual abuse, and extreme physical violence.
In my late teens, my parents feared we would escape and took us to an Amish community where we were adopted and became baptized members. I was devastated to once again find myself in a world of fear, sexual abuse, animal cruelty and other crimes. Going to the police was forbidden.
A few years later I was sexually assaulted by the bishop of my church. I knew I had to get help and one morning in early March I made a dash for a tiny police station in rural Minnesota. As a result, the bishop and his family fled to Canada and I found myself plummeted into the strange modern world with only a second-grade education and no form of identification.
5-star Amazon reviews:
“This is a compelling, courageous story beautifully written...”
“Best book I have read in a very long time. Misty Griffin deserves a gold medal.“
“This book is educational, moving, and mostly inspirational.”
Author’s Note- To everyone out there, I beg you to never turn a blind eye towards child abuse or think someone else will report it. You could be that child’s last chance, be a hero and report ( National Child Abuse Hotline 1-800-422-4453)– Misty Griffin
Authors and Publishers: How to Sponsor Kindle Nation Daily