Sinners Take All (The Quest for the Shroud Book 1) 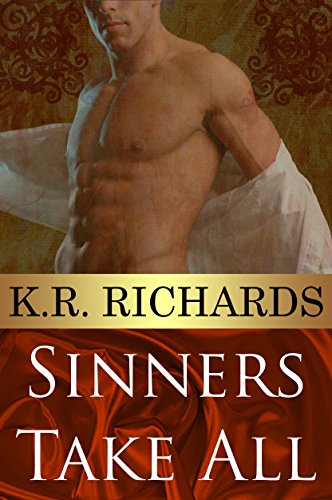 4.4 stars – 19 reviews
Kindle Price: FREE!
Text-to-Speech and Lending: Enabled
Don’t have a Kindle? Get yours here.
Here’s the set-up:

“K.R.Richards returns with a fast paced story based on the mysteries and legends of the early church that have always grabbed our imaginations and just won’t let go. This time the hunt for the Shroud of Jesus has the Lords of Avalon traveling to Scotland to uncover the last resting place of one of Christianity’s most precious relics. Following the footsteps of the Knights Templar, the Lords must follow clues, rescue their ladies (as well as their comrades) and stay on step ahead of the killers chasing the power of the Shroud. Richards brings us characters we all love and mysteries we all want to solve in places we all want to visit. It’s a triple treat you just can’t resist.” – Amazon Five Star Verified Review

SINNERS TAKE ALL is the first book in the exciting, new Quest for the Shroud series by K.R. Richards.
Scholars are being murdered, and the only thing that the victims have in common is their search for a shroud brought to Scotland by Templars fleeing persecution in the fourteenth century. Francis Nightshade and Lucien Saintmaur, Lord Wyldhurst, are Department and Avalon Society members assigned to the investigation. Their mission is to travel to Scotland, hunt down the villains responsible for the murders, find the shroud, and keep it safe.
Due to the dark sins of his past, Nightshade never planned to marry. Meeting Miss Violet Frost changes everything. Shunned by society, the two loners and misfits strike up a friendship. Will Nightshade’s feelings about Violet change his mind about marriage or will he leave her behind to marry another?
Luc is perfectly happy living the life of an unrepentant rake – until he meets odd and prickly Hazel Graham in Scotland. Something about shy and fearful Hazel tugs at his heartstrings. Because of her past, Hazel is certain she can never marry. Can Luc help Hazel overcome her fears and take a chance on love?

Become a fan of K. R. Richards and follow her on her BookGorilla author page!