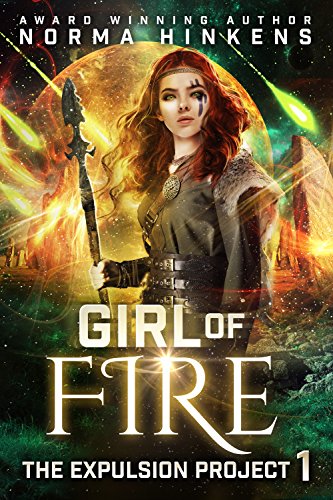 ORIGIN. DESTINY. FATE. How far would you go to unravel the truth?

Trattora is the adopted daughter of the Chieftain on a primitive frontier planet. Velkan is an indentured serf who has never known a day of freedom. Forced to flee a terrifying invasion by Galactic Pirates, they find themselves thrown together on a ramshackle mining vessel that harbors more than one dark secret. Fate and chemistry combine when the pair’s matching birth bracelets lead them to a shocking discovery about their true lineage. Stakes rise when they uncover the classified Expulsion Project, and the devastating sacrifice their birth families made to spare their lives. Determined to save them from liquidation, Trattora and Velkan plunge headlong into a frantic race against time and space to take down the genocidal self-actualizing software that now controls large swathes of their home planet.

But will they navigate the treacherous dealings of the seedy Galactic underworld in time to rescue the families who loved them enough to let them go?

Girl of Fire is the first novel in The Expulsion Project, a sci-fi, dystopian thriller trilogy with a whisper of romance, a heavy dose of adventure, and action galore. If you are a Firefly or Dark Matter fan, or still in Hunger Games or Cinder withdrawal, this is the book mashup for you!

* Not geared to fans of hard science fiction.

“On par with ‘The Hunger Games,’ better than ‘Divergent,’ and with just a hint of the scheming found in ‘Game of Thrones,’ this is sure to be a hit for the young and not so young alike.” Ms. Just One More Book, Goodreads Reviewer.

“If you enjoy science fiction and young adult books such as Cinder by Marissa Meyer, The Thief by Megan Whalen Turner, or Brandon Sanderson’s YA books, you will definitely enjoy Girl of Fire.” Anemone Flynn, Goodreads Reviewer
Enjoy Norma Hinkens’ Books? Tell us Why and Win a Free Book!
Authors and Publishers: How to Sponsor Kindle Nation Daily