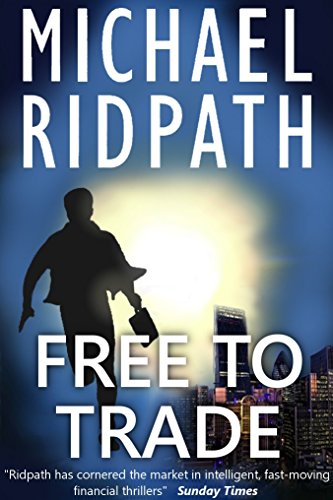 It was a deal to die for. And somebody will.

Paul Murray is an ex-Olympic runner, so his training is perfect for the rigours of multi-million dollar bond trading in the City of London. The pace is breakneck, the smell of success intoxicating.

Then the body of his colleague Debbie is fished out of the Thames and Paul’s world is turned upside down.

He begins a dangerous, chaotic tumble into the darker side of trading. From the glass towers of London to the frenzied deals of Wall Street and the murky back rooms of Las Vegas glitz, Paul has got to find answers fast before someone else makes a killing.

Free To Trade was Michael Ridpath’s first financial thriller. It was translated into 33 languages and stayed at No 2 in the British bestseller lists for three months.

Ridpath was prescient: the novel features “Uncle Sam’s Money Machine”, an early version of a CDO, or Collateralised Debt Obligation, the financial instrument that was later to blow up the international banking system.

“It is the author’s insight into the complexities of the business that gives his novel so much life. And he can write… Yes, he has a winner here.” – The New York Times

“The author makes you feel the intensity of the trading floor, the combination of number-crunching and gut instinct that leads people to take big risks, the thrill of playing a hunch and getting it right.” – Los Angeles times Book Review

“For sheer entertainment, there’s nothing in the mystery genre to beat a well-constructed thriller… …the new book of Michael Ridpath provides a master-class in how it’s done. I read it in one gulp.” – The Observer

“As slick and compulsive a piece of storytelling as can be found in the best of blockbuster fiction.” – Sunday Express.