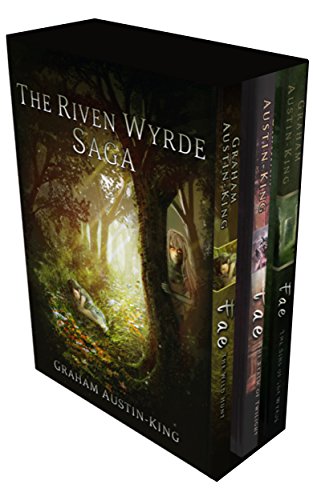 – Learn More
Text-to-Speech and Lending: Enabled
Don’t have a Kindle? Get yours here.
Here’s the set-up:
“Austin-King’s writing is descriptive and layered, full of mystery and tension…” Sarah Chorn, Bookworm Blues

The entire Riven Wyrde Saga including:

Sometimes the faerie tales are true. Sometimes, they are a warning.

For a hundred generations the fae have been locked away from the world. In the cold. The Outside. They have faded out of sight and mind, into myth and folklore. But now the barriers are weakening, and the fae push against the tattered remnants of the Wyrde as they seek a way to return.

As a new religion spreads across the world, sweeping the old ways and beliefs away before it, a war-like people look across the frozen ocean towards the shores of Anlan, hungry for new lands. War is coming, even as the Wyrde of the Droos is fading. Only by realising the truth lost in a child’s tale will the world hope to withstand the wild hunt.

Fae – The Realm of Twilight:

The Riven Wyrde Saga Continues… The Wyrde is dead and gone, its protection passed into the ether. The fae have been loosed upon the world as they begin their wild hunt, a nightmare from fables and legend made flesh. At Hesk, in the heart of the Barren Isles, Ylsriss must confront a reality she never could have imagined when her son is stolen from her by the fae. Her desperate attempts to reclaim him lead her far from this world and deep into the Realm of Twilight where a still darker truth awaits her. As the Bjornmen invaders drive their way deeper into Anlan, King Pieter refuses to act. Selena is forced to confront him directly as Devin and Obair flee Widdengate and begin a search for answers, seeking help from a woman who may be little more than a memory.

Fae – The Sins of the Wyrde:

The thrilling conclusion to the Riven Wyrde Saga.

With her king’s plans laid bare, Selena must take drastic steps as the invaders push deeper into Anlan, driven by the schemes of the Sealord. The war between Anlish and Bjornmen rages, even as the fae remain unchecked. Politics is not merely a game for mankind however, and within the fae court ancient plans are coming to fruition, while the armies of the fae are readied in preparation for the purge.

The answers to the mysteries of the Wyrde may already rest with Devin and Obair. Their shocking discovery may hold the key to the Wyrde and the lost secrets of the druids, but the price is higher than anybody could have imagined.

“The action is great, the suspense is well done and the Fae are truly scary. Graham Austin-King creates an interesting and varied world populated by real people who live in hard times.” – Leanne Ellis, Bloody Cake News
Enjoy Graham Austin-King’s Books? Tell us Why and Win a Free Book!
Authors and Publishers: How to Sponsor Kindle Nation Daily