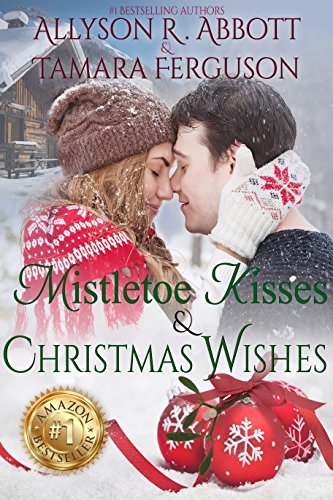 There’s something so special about a Christmas Kiss.
And when it’s your first?
Never underestimate the power of that kiss!

Emma Louise Fallon, aka Elf, has two wishes for Christmas. Having spent the last few months bragging about her latest boyfriend, who’s turned out to be a womanizing cheat, one, she needs to escape her well-meaning family, and, two, she needs to avoid all men while she’s in a man-hating mode.

But stranded alone in a cold isolated cabin, when her girlfriend is forced to bail out on their vacation plans, Elf makes one more desperate wish: Can she please learn how to build a fire before she freezes to death?

The solo rustic life is becoming all too much for her. She’s convinced that a stray cat, who has decided to keep her company, has magical powers, that the local shop owners are secretly Mr. and Mrs. Claus, and nothing can stop her from laughing when the hot local Martian -come cop – come veterinarian – introduces himself as Rudi.

Will Elf need to break her rule about staying away from men, and rely on this hunk for helping her start a fire? Or, worse, yet, will she be able to control the fire that Rudi’s ignited in her?

Seventeen-year-old Jason Matthews made a wish when he’d shared a kiss with Katherine Conlin under the mistletoe at Dragonfly Pointe, fourteen years ago. Now an Air Force Captain and wounded warrior, he awakens in the hospital in Germany, where his dreams have been invaded by the girl from his past.

Once he returns home to the states, he finds out approaching Kat might be a little more difficult than he’d thought, since she’s been in a long term relationship for nearly two years.

But another year later, when Jason discovers she’s on her way to the Dragonfly Pointe Inn for the Christmas holidays, without her boyfriend, he seizes the opportunity to be reacquainted.

Kat had been expecting a proposal this Christmas, and when her boyfriend backs out, yet again, on the carefully laid plans she’s made for them, she realizes she probably wouldn’t be happy with him anyway.

Kat has often wondered what happened to Jason Matthews, the boy she’d made a wish with years ago, and the last thing she expects is to run into him again at the Dragonfly Pointe Inn.

Will there still be that special Christmas magic between them, to make those long ago wishes come true?

Allyson R. Abbott: Goodbye, Hello became a #1 international bestselling book in 2015 and a total of five books have received glowing 5 star reviews from The Readers Favorite Editorial Book Reviewers, earning a hefty collection of 5 Star seals. Allyson also has a bestselling nonfiction book called How to Write a Simple Book Review, which has accumulated over 50-5 star reviews.