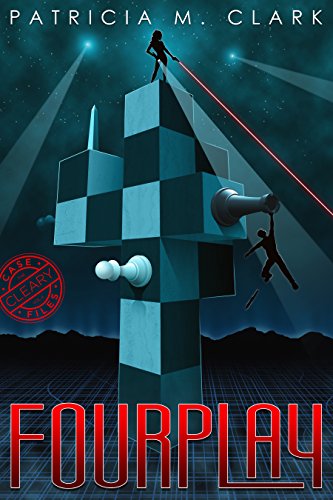 Kindle Price: $2.99
Text-to-Speech and Lending: Enabled
Don’t have a Kindle? Get yours here.
Here’s the set-up:

“In the fourth book of the Cleary Case Files series, Clark (Third Breath, 2014, etc.) brings back FBI Special Agent Shawn Cleary in a gripping blend of terrorism, serial killers, and even a little romance… A well-crafted thriller that manages to be both timely and timeless.” – Kirkus Reviews

This is the one you’ve been waiting for!!

Fourplay, Book Four of the Cleary Case Files, finds FBI Agent Shawn Cleary acting as both guardian and foil. Twin serial killers Trevor and Mitchell Gant have framed her, killed her grandmother, and stalked everyone she cares about with a vow to save her for last.

As Mitchell’s murder trial finally begins, Trevor lurks in the shadows doing everything he can to spring his brother. Nothing is off the table; hiring mercenaries to kidnap children, killing FBI agents, or tampering with the jury. The endgame for Mitchell leaves everyone stunned.

Terrorist threats and the ensuing chaos nearly overwhelm Shawn as she pursues perpetrators from Washington, D.C. to California and finally Alaska. Shawn and her cohorts rush to the scene of a cruise ship attack where the raging fires and climbing death toll create the perfect diversion for Trevor’s checkmate ploy that Shawn can’t possibly anticipate.

“Clark’s greatest gift to readers is her breakneck pacing, which keeps the narrative flying along…it zigs and zags along the way, taking unexpected turns…She doesn’t give short shrift to characterization, though, especially of Shawn, who cares deeply for those she loves while also being a tough agent near the top of her field…A well-crafted thriller that manages to be both timely and timeless.” – Kirkus Reviews