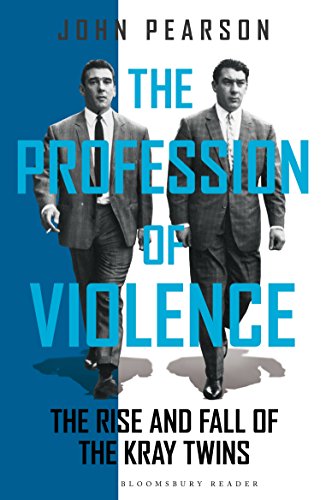 These books can tell you everything you ever wanted to know about some of history’s most notorious mobsters.

The Profession of Violence: The Rise and Fall of the Kray Twins (4.5/5 stars, currently priced at $5.03)

Reggie and Ronald Kray ruled London’s gangland during the 1960s with a ruthlessness and viciousness that shocks even now. Building an empire of organised crime such as nobody has done before or since, the brothers swindled, intimidated, terrorised, extorted and brutally murdered. John Pearson explores the strange relationship that bound the twins together, and charts their gruesome career to their downfall and imprisonment for life in 1969.

Now expanded to include further extraordinary revelations, including the unusual alliance between the Kray twins and Lord Boothby – the Tory peer who won £40,000 in a libel settlement when he denied allegation of his association with the Krays – The Profession of Violence is a truly classic work. 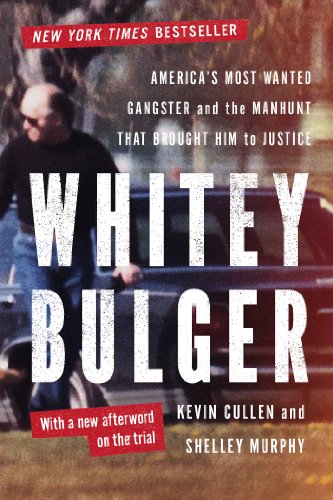 Whitey Bulger: America’s Most Wanted Gangster and the Manhunt That Brought Him to Justice (4.5/5 stars, currently priced at $9.99)

“This is the definitive story of Whitey Bulger…a masterwork of reporting.” —Michael Connelly, best-selling author of The Black Box

An instant classic, this unforgettable narrative, rich with family ties and intrigue, follows the astonishing career of a gangster whose life was more sensational than fiction. Cullen and Murphy have broken more Bulger stories than anyone, and Whitey Bulger became front-page news, revealing the mobster’s secret letters written from Plymouth Jail after the sixteen-year manhunt that led to his capture and offering unparalleled insight into his contradictions and complex personality. The afterword covering the results of the dramatic and emotional trial provides a riveting denouement to this “eminently fair and thorough telling of a life, which makes it all the more damning” (Boston Globe). 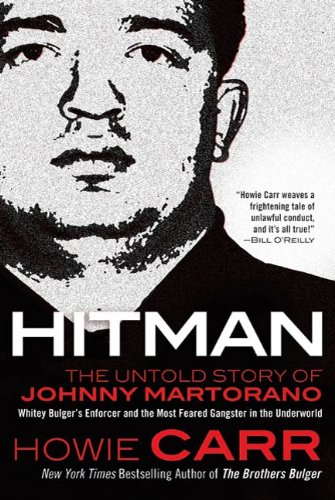 Hitman: The Untold Story of Johnny Martorano: Whitey Bulger’s Enforcer and the Most Feared Gangster in the Underworld (4.5/5 stars, currently priced at $9.99)

Martin Scorsese’s The Departed barely touched on his story. Now radio talk show sensation, crime reporter, and Boston Herald columnist Howie Carr takes us into the heart of the life of gangster Johnny Martorano in Hitman.

For two decades Martorano struck fear into anyone even remotely connected to his world. His partnership with Whitey Bulger and the infamous Winter Hill Gang led to twenty mob murders–for which Johnny would serve twelve years in prison. Carr also looks at the politicians and FBI agents who aided Johnny and Whitey, and at the flamboyant city of Boston which Martorano so ruthlessly ruled.

A plethora of paradoxes, Johnny Martorano was Mr. Mom by day and man-about-town by night. Surrounded by fast-living politicians, sports celebrities, and show biz entertainers, Johnny was charismatically colorful–as charming as he was frightening. After all, he was, in the end…a hitman. 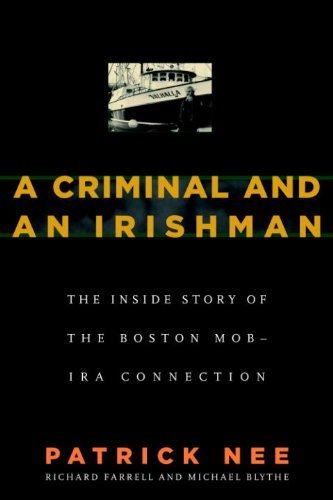 A Criminal and an Irishman: The Inside Story of the Boston Mob-IRA Connection (4/5 stars, currently priced at $11.99)

Former rival and associate of James “Whitey” Bulger tells all. After returning from Vietnam where he served as a combat Marine, Pat Nee fought a gang war against Whitey Bulger. When members of Nee’s Mullen gang killed the leader of Bulger’s Killeen faction, Nee arranged for the dispute to be mediated by Howie Winter and Patriarca crime family captain Joseph Russo. The two gangs joined forces, with Winter as overall boss. When Winter was convicted of fixing horse races in 1979, Bulger became leader, and Nee responded by concentrating his energy on raising money and smuggling guns to the Provisional IRA. Disgusted by Bulger’s brutality, and increasingly focused on the Irish cause, Nee distanced himself from his former ally. Ultimately it was revealed that, for years, Bulger had served as an FBI informant.

A Criminal and an Irishman is the story of Pat Nee’s life as an Irish immigrant and Southie son, a Marine, a convicted IRA gun smuggler, and a former violent rival and then associate of James “Whitey” Bulger. His narrative transports the reader into the criminal underworld, inside planning and preparation for an armored car heist, inside gang wars and revenge killings. Nee details his evolution from tough street kid to armed robber to dangerous potential killer, and discloses for the first time how he used his underworld connections and know-how as a secret, Boston-based operative for the Irish Republican Army. For years Pat smuggled weapons and money from the United States to Ireland – in the bottoms of coffins, behind false panels of vans – leading up to a transatlantic shipment of seven and a half tons of munitions aboard the fishing trawler Valhalla. No other Southie underworld figure can match Pat’s reputation for resolve and authenticity. 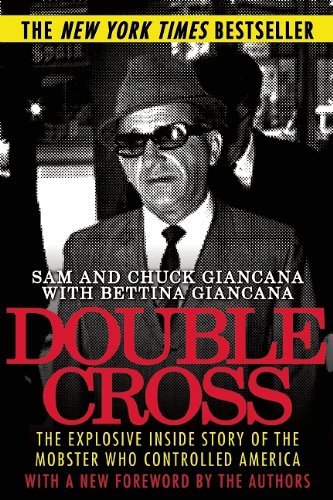 Double Cross: The Explosive Inside Story of the Mobster Who Controlled America (4.5/5 stars, currently priced at $8.48)

Featuring a brand-new introduction by the author, this New York Times bestseller presents an inside exposé of mob boss Sam Giancana—talented businessman, Las Vegas entrepreneur, ruthless killer, and outside player for the CIA’s dirtiest deeds. Giancana clawed his way to the top of the Mafia hierarchy by starting as a hit man for Al Capone. He partied with major stars such as Frank Sinatra and Marilyn Monroe and did business with agents ranging from the CIA to the Vatican to the shah of Iran.

When Joe Kennedy gave Giancana the chance to use mob muscle to get his son John elected, Giancana jumped at the task. But the Kennedy brothers double-crossed him, waging full-scale war on organized crime throughout the United States, and Giancana found himself going after the Kennedys. Undoubtedly, his story, written with suspense and truthful conviction, changed the course of American history. This shocking, inside-the-syndicate tell-all reveals Giancana’s first-person testimony regarding his involvement in the deaths of Monroe and others, among other shocking secrets. 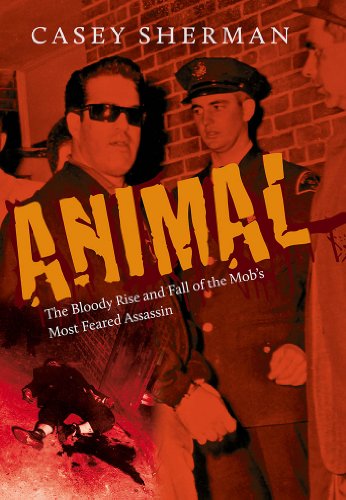 Animal: The Bloody Rise and Fall of the Mob’s Most Feared Assassin (4/5 stars, currently priced at $11.99)

Joe Barboza knew that there were two requirements for getting inducted into the Mafia. You had to be Sicilian. And you had to commit a contract killing. The New Bedford–born mobster was a proud Portuguese, not Sicilian, but his dream to be part of La Cosa Nostra proved so strong that he thought he could create a loophole. If he killed enough men, if he did enough of the Mafia’s dirtiest biddings, then they would have no choice but to make him a Made Man.

Barboza’s brutal rise during one of the deadliest mob wars in U.S. history became the stuff of legend, both on the bloodied streets of Boston and in the offices of the FBI and the U.S. Attorney General. He took sick joy in his crimes, and it became increasingly difficult for the mob to keep the Animal on his leash. But soon the hunter became the hunted. Betrayed by the mob and now on the run, Boston’s most notorious contract killer forged a Faustian bargain with two unscrupulous FBI agents—a pact that would transform the U.S. criminal justice system. From false testimony and manipulated evidence that sent mob leaders to death row, to the creation of the Witness Protection Program so the feds could protect their prized, cold-blooded witness, this was the horrific, dramatic first act in a story of murder and FBI corruption still being played out today in the news and the courtroom with the capture and trial of Whitey Bulger. Barboza’s legacy, buried for years thanks to the murders or deaths of its participants, is finally coming to light and being told in its unvarnished brutality by one of America’s most respected true crime writers. 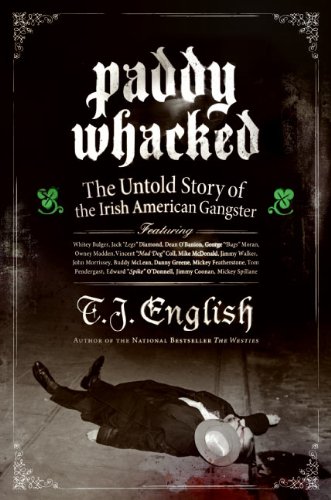 Stretching from the earliest New York and New Orleans street wars through decades of bootlegging scams, union strikes, gang wars, and FBI investigations, Paddy Whacked is a riveting tour de force that restores the Irish American gangster to his rightful preeminent place in our criminal history — and penetrates to the heart of the American experience. 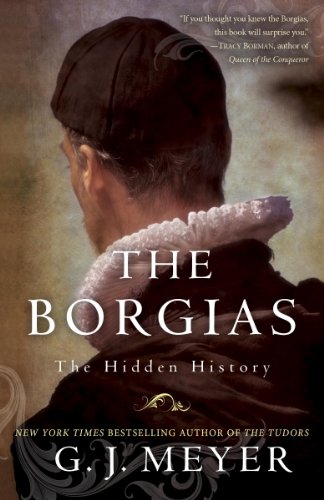 Included here because many historians consider The Borgias to be the first organized crime family in history.

The startling truth behind one of the most notorious dynasties in history is revealed in a remarkable new account by the acclaimed author of The Tudors and A World Undone. Sweeping aside the gossip, slander, and distortion that have shrouded the Borgias for centuries, G. J. Meyer offers an unprecedented portrait of the infamous Renaissance family and their storied milieu.

They burst out of obscurity in Spain not only to capture the great prize of the papacy, but to do so twice. Throughout a tumultuous half-century—as popes, statesmen, warriors, lovers, and breathtakingly ambitious political adventurers—they held center stage in the glorious and blood-drenched pageant known to us as the Italian Renaissance, standing at the epicenter of the power games in which Europe’s kings and Italy’s warlords gambled for life-and-death stakes.

Five centuries after their fall—a fall even more sudden than their rise to the heights of power—they remain immutable symbols of the depths to which humanity can descend: Rodrigo Borgia, who bought the papal crown and prostituted the Roman Church; Cesare Borgia, who became first a teenage cardinal and then the most treacherous cutthroat of a violent time; Lucrezia Borgia, who was as shockingly immoral as she was beautiful. These have long been stock figures in the dark chronicle of European villainy, their name synonymous with unspeakable evil.

But did these Borgias of legend actually exist? Grounding his narrative in exhaustive research and drawing from rarely examined key sources, Meyer brings fascinating new insight to the real people within the age-encrusted myth. Equally illuminating is the light he shines on the brilliant circles in which the Borgias moved and the thrilling era they helped to shape, a time of wars and political convulsions that reverberate to the present day, when Western civilization simultaneously wallowed in appalling brutality and soared to extraordinary heights.

Stunning in scope, rich in telling detail, G. J. Meyer’s The Borgias is an indelible work sure to become the new standard on a family and a world that continue to enthrall.

Tech Tip of the Week: I Stopped Liking on Facebook Two Years Ago: Here’s What Happened