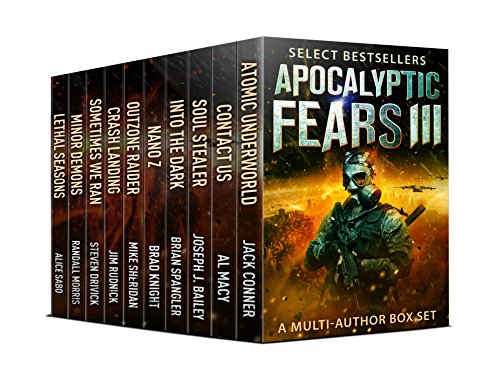 Kindle Price: 99 cents
Text-to-Speech and Lending: Enabled
Don’t have a Kindle? Get yours here.
Here’s the set-up:

A Multi-Author Box Set of Select Bestsellers. Hundreds of pages of apocalyptic fiction for a bargain price. This is Volume III (3). Look for other books in series for more great stories!

When the world falls apart, when civilization collapses, when life as we know it ends, our greatest terrors becomes real. Perhaps it’s nuclear war with its poisonous radiation, hideous plagues or chemical contamination, rogue artificial intelligences controlling killer robots, or zombies that turn our friends and neighbors into inhuman monsters. What can the common man or woman do in the face of apocalyptic fears?

Atomic Underworld by Jack Conner: Washed-up professional gambler Tavlin Metzler is done working with the shadowy criminal network that lurks beneath the city streets, but when a brutal and mysterious set of murders occurs in the very bedroom of his old mob boss, Tavlin gets drawn back into the mix.

Contact Us by Al Macy: On May 22, 2018, every person on Earth sneezes. Hours later, an alien spacecraft appears over New York City and broadcasts a dire message of impending doom. The future of the human race will depend on the whims of a solitary extraterrestrial who appears in the form of Walter Cronkite

Soul Stealer by Joseph J. Bailey: Heaven has fallen. The legions of Chaos have overrun the world. Uërth is in ruins. With the Heavenly Host’s fall, Angel Swords rain from the heavens. Only the most honorable and purest of heart are able to take up the Angel Swords and wield them against the throngs of Chaos.

Into the Dark by Brian Spangler: Emily wakes to find that her world has plummeted into darkness–the clouds have spilled out of the sky and taken the sun.And there is more to the mist than just the dangers of being blind–the fog is poison, killing everything in its path.

Nano Z by Brad Knight: Fired from his job of twenty-two years, Mack is contemplating his bleak prospects when he unwittingly helps Amber, a fourteen-year-old girl with a dark, troubled past. Mack tries his best to protect her as they travel through lawless lands with roaming undead.

Outzone Raider by Mike Sheridan: 2041. The Great Global War is over. What’s left of America is in chaos. Beautiful but cynical exo-robotic operator Vikki Gurin supplies Outzone bandit Dima Aslanov with information he needs for daring raids, but when they steal vital supplies destined for the federal government, he takes a step too far.

Crash Landing by Jim Rudnick: As the first wisps of atmosphere touch the badly damaged explorer ship Drake, only its AI remains. The pilot and nine of the ten occupants are dead. The only live human lies in the robo-doc tank in the rear of the ship, half awake, half in a stupor, not knowing that the rest of the crew is dead.

Sometimes We Ran by Steven Drivick: Our hero had it all: A great job, a beautiful wife, a nice car. As he approached middle age, all the comforts of life were within reach. Then the zombies came and it all disappeared in a flash. Now he walks in a shattered, post-apocalyptic world filled with hungry undead and desperate survivors. His long walk to escape the dead is slowly becoming a death march.

Minor Demons by Randall Morris: The Dragon made a mistake. Years ago, he branded the demon Shadow’s father Abbadon traitor, guilty of conspiring with the angels, and currently tortures him in the lowest circle of Hell. Armed with Michael the Archangel’s short blade, Shadow vows to rescue his father no matter what.

Lethal Seasons by Alice Sabo: In the near future, a virus has whittled down the human race. The remaining population struggles in a world ravaged by extreme weather. Cities are empty, farms deserted, factories abandoned. When three wildly different young lives intersect, a chain reaction of death and violence will change the course of the future.