Sacred Planet: Book One of the Dominion Series 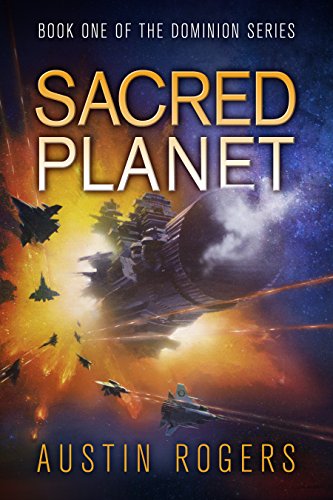 4.5 stars – 31 reviews
Kindle Price: 99 cents
Text-to-Speech and Lending: Enabled
Don’t have a Kindle? Get yours here.
Here’s the set-up:

“An ambitious, ardent launch that sets a stellar precedent for installments to follow.” –Kirkus Reviews

Humanity teeters on the brink of galactic war.

Only one woman can stop it. Only one man can save her.

After centuries of expansion into the galaxy and no contact with intelligent, extra-terrestrial life, humanity is split into three superpowers, each dominating one of the spiral arms closest to Earth: Orion, Carina, and Sagittarius. Divided along political, cultural, and religious lines, these galactic mega-states have grown alien to each other over time. Inter-arm relations have eroded. Minor differences have become dangerous disparities.

Now a ruthless religious faction threatens to plunge the galaxy into a catastrophic war.

Conflict sparks when Sierra Falco, the Carinian prime minister’s daughter, is attacked on her space yacht by a powerful and shadowy enemy. As a popular advocate for peace, Sierra’s loss destabilizes the fragile balance of the galaxy. But her attackers’ plans are disrupted when a rugged band of scavengers stumble across the yacht and jump at the opportunity to make a profit. Davin, captain of the scavenger ship, is caught between the lure of fabulous wealth and the nag of conscience as he is dragged into a conspiracy bigger than he can imagine.

A race begins between those who seek to prevent war and the secretive forces who want to escalate it—apparently with Earth in their crosshairs.

In this universe, Earth—the Sacred Planet, the epicenter of human civilization—holds the coveted key to victory.

Whoever controls Earth controls the galaxy.

Fans of Firefly, Old Man’s War, and the Expanse series will feel at home in the world of Dominion.

For a taste of galaxy-spanning adventure and epic space opera, download a free sample of SACRED PLANET by clicking the “Send a free sample” button above.