The Threat Below (Brathius History Book 1) 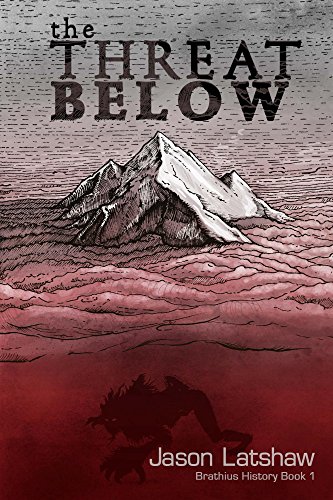 4.6 stars – 120 reviews
Kindle Price: 99 cents
Text-to-Speech and Lending: Enabled
Don’t have a Kindle? Get yours here.

Three hundred years ago, something arose and pushed humanity to the brink of extinction. Now, a small remnant – the descendants of the few survivors who were able to escape the massacre below – lives above the clouds, on the top of a mountain. But there’s been a change. Their water supply is being poisoned. Someone, or something down below is trying to kill them. Now an expedition, including seventeen year-old Icelyn Brathius, must descend and face the monsters that wiped out civilization centuries ago.

The Shocking True Nature of the Threat Below

As Icelyn faces dangers in a world humans are not meant to survive, she learns that not everything is as it seems, uncovers an ancient revelation, and then faces a choice that may change the fate of everyone above and below the clouds. Will Icelyn be strong enough to both survive and bear the terrible secret?

Join Icelyn Brathius as she leaves everything she has ever known to journey to the place no one was ever supposed to go.

“This postapocalyptic YA novel is a fast-paced, fascinating slam dunk of a book. The Threat Below is… a mind-expanding tale of postapocalyptic humanity and truth–and the survival of both.” –5 Star Clarion Review

“Whoa! Can you say epic read? Well, I can, and the title of that read is The Threat Below… I loved this book. Loved. It. Young adult or no, The Threat Below is simply a delightful read for anyone who has an interest in fantasy, action, adventure, dystopian stories or just a unique and inventive piece of fiction.” –Readers’ Favorite 5 Star Review

“…Features dangerous treks, tortured relationships, and hidden histories… The characters – especially Icelyn – are well-drawn, as are their tortuous relationships. This isn’t just about saving the world – it’s about a teenager coming to know herself, a task almost as daunting. Serious ideas about morality and even godhood are grist for the mill…” –Kirkus Reviews

Enjoy Jason Latshaw’s Books? Tell us Why and Win a Free Book!