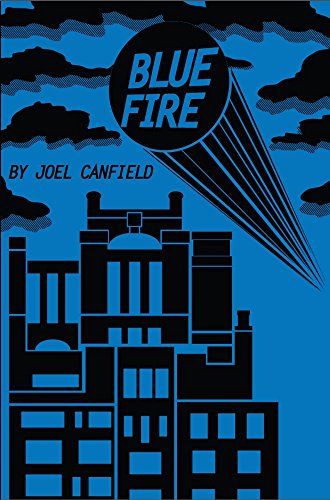 4.5 stars – 20 Reviews
Kindle Price: 99 cents
On Sale! Everyday price:
Text-to-Speech and Lending: Enabled
Don’t have a Kindle? Get yours here.
Or check out the Audible.com version of Blue Fire (The Misadventures of Max Bowman Book 2)
in its Audible Audio Edition, Unabridged!
Here’s the set-up:

“In Canfield’s well-paced thriller set in New York City, private detective Max Bowman is hired to track down a troubled and reclusive comic book artist named Ben Mikov. The novel is a compelling read, and the characters, including Bowman’s lady friend, Jules, and his neurotic, obsessive dog, Eydie, are lovingly drawn. Canfield successfully weaves together an Ayn Rand subplot, CIA-backed LSD poisoning, and gay conversion therapy into a heartfelt thriller that will leave readers eager for more.” – BookLife Prize for Fiction

Max Bowman is haunted by both of them – and he just might lose his mind as a result.

When Max takes on the mission to find the long-lost creator of cult superhero Blue Fire, he ends up getting dosed with a chemical that upends his sanity just when he needs it the most. Now he’s got to contend with zombies on the Upper East Side, a cult run by a clueless pawn, a hipster rapist who knows her way around a sword, a secret CIA spook program left over from the Cold War and powerful old enemies who are out to destroy him – all while trying to keep his mind from crashing and burning for good.

Blue Fire’s mantra in the old comic books used to be, “For good to be purged of evil…Blue Fire must endure.” But now it’s Max Bowman who must endure – and he’s as far from a superhero as you can get.

Enjoy Joel Canfield’s Books? Tell us Why and Win a Free Book!
Authors and Publishers: How to Sponsor Kindle Nation Daily