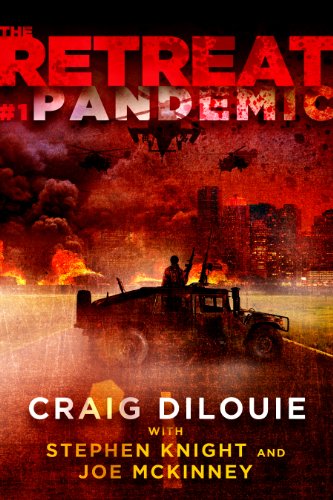 – Learn More
Text-to-Speech and Lending: Enabled
Don’t have a Kindle? Get yours here.
Available on Audible
Here’s the set-up:

As a new disease turns people into sadistic, laughing killers, in Boston, a battalion of light infantry struggles to maintain order. As the numbers of infected grow, the battalion loses control, and the soldiers find themselves fighting for their lives against the very people they once swore an oath to protect.

During the ensuing collapse, the lost battalion learns the Army is still holding out in Florida, which has been cleared of the Infected. Harry Lee, its commander, decides the only hope for his men is to get there. But first they must cross more than a thousand miles of America that has been turned into a war zone, fighting a fearless, implacable, and merciless enemy.

“DiLouie + McKinney + Knight = Awesome! The infected provided some terrifying entertainment that I hope to see more of in the series.” – Zombiephiles.com

“Dark and gritty … THE RETREAT kept me reading long into the night, and after I’d read the last line, maniacal, leering Klowns stalked my dreams.” – Sean T. Smith, author of the WRATH trilogy