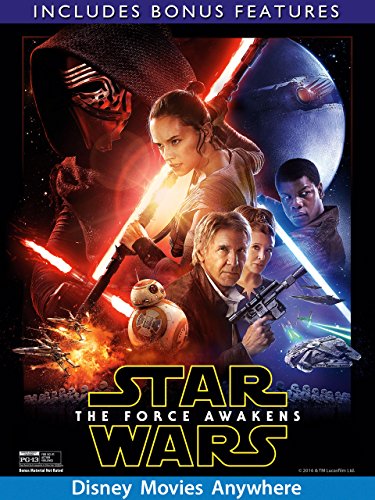 Star Wars: The Force Awakens + Bonus Features (PG-13, available to pre-order for $17.99) won’t be released on Blu-ray until Tuesday, April 5, but if you order it in digital HD it will be added to your Amazon Video Library on Friday April 1, with all the same bonus features as the Blu-ray release and at a price $2 less than the Blu-ray.

When critical information is placed into a simple droid, both the evil First Order and the heroic Resistance go searching for it.

Then something neither of them planned for happens: Rey, a scavenger from the planet Jakku finds the droid and keeps it as her own. Finn, an ex-stormtrooper who hopes to leave his past behind him, crosses paths with her and breaks the news of what exactly the importance of the droid is.

Next thing either of them know is that they are on the run in order to withhold the droid from the First Order. They meet a pair of old buddies and after a few skirmishes between them and the determined First Order, the droid is brought to the Resistance base.

There, multiple plans are hatched against the First Order while the secret information on the droid is slowly and surely working itself out…
– Written by Brian McInnis

Click here to pre-order Star Wars: The Force Awakens + Bonus Features, then look for it in your Amazon Video Library on April 1.