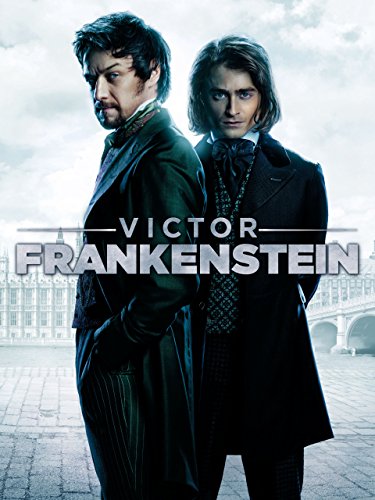 James McAvoy and Daniel Radcliffe star in a dynamic and thrilling twist on a legendary tale. Radical scientist Victor Frankenstein (McAvoy) and his equally brilliant protégé Igor Strausman (Radcliffe) share a noble vision of aiding humanity through their groundbreaking research into immortality. But Victor’s experiments go too far, and his obsession has horrifying consequences. Only Igor can bring his friend back from the brink of madness and save him from his monstrous creation.

My Take
This script was adapted from Mary Shelley’s gothic horror novel by Paul McGuigan, who also wrote the script for American Ultra—another film that divided critics and audiences like this one does. McGuigan seems to have a somewhat pulpy sensibility people either love or hate. He seems to particularly enjoy writing characters whose sanity is stretched to the limit, and that infuses both the character and his or her actions with a kind of manic energy and pitch-black sense of humor.

This story is not faithful to the source material, it serves more as a kind of imagined prequel that shows us how Victor Frankenstein came to be fixated on the idea of bringing an assemblage of dead body parts back to life. Here, Igor is a hunchbacked circus “freak” whose knowledge of anatomy so impresses Frankenstein that the good doctor is moved to rescue the young Igor, correct his deformity and take him on as an assistant.

At first Igor is thrilled to put his medical knowledge to use, but the more he comes to understand fully what Frankenstein has in mind, the more misgivings Igor has about it. Still, Igor feels he owes his very life to Victor, and the friendship between these two men of different, but equally traumatic backgrounds is what this film is really all about.

The performances by McAvoy as Frankenstein and Radcliffe as Igor are wonderful, as you’d expect, and the extremely high production values and period setting make this film visually sumptuous as well. Many critics cited McAvoy’s scenery-chewing performance in their negative reviews, but my feeling is that McAvoy fully committed to the movie’s Saturday Serial, over-the-top action/adventure aesthetic and threw himself into the role with great relish.

The one false note for me is the character of Detective Inspector Turpin, who’s on a mission of religious mania to prove Frankenstein’s work is the work of the devil. It’s never clear how Turpin came to suspect Frankenstein in the first place, why he became so interested in past incidents of a man expressing interest in buying parts of deceased zoo animals. There was nothing illegal in what Frankenstein was proposing to the zookeepers, so there’s no reason why the incidents should’ve come to Turpin’s attention in the first place and his ongoing obsession with the matter doesn’t ever seem completely believable. Still, Turpin’s sort of shoehorned in as a man bent on bringing Frankenstein’s work to a halt, even if it means breaking the law himself.

While Shelley purists are likely to be disappointed, the film is beautiful to look at and very well-acted, and the work between McAvoy and Radcliffe is wonderful to watch. I rate Victor Frankenstein 4/5 stars.