Mary Hades: Beginnings: Books One and Two, plus novellas 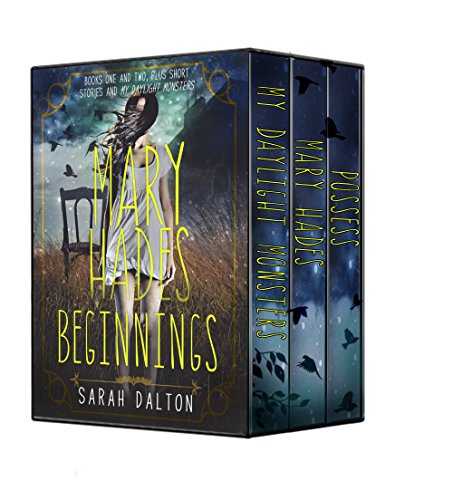 From My Daylight Monsters, to Possess. This box set features two full-length novels, one novella and two short stories, all arranged conveniently for maximum enjoyment. Immerse yourself in the macabre world of Mary Hades, a YA horror series with a difference.

I always thought my demons came out in the day, rather than at night. I’ve never been scared of the dark. I’ve only ever been scared of real things: getting ill, having injections, physical pain… death. Those are my monsters, not ghosts or vampires or whatever else can hide under your bed at night.

The dark makes everything worse.

When 17-year-old Mary Hades is admitted by her parents to a psychiatric unit, her worst nightmares are confirmed. How can she get better in a place that fills her with dread? Her friendships with the other patients — her wacky roommate Lacey, her protector Mo, and the mysterious, green-eyed Johnny — begin to fill her with hope, until she realizes that people in the hospital are dying without explanation. Something sinister stalks the corridors, and it’s up to Mary to stop it. But the closer she gets to the answer, the more perilous her situation becomes, and Mary discovers the only way to get out alive is to confront the things that scare her most.

Not many seventeen year old girls have a best friend who’s a ghost, but then Mary Hades isn’t your average teenager.

Scarred physically and mentally from a fire, her parents decide a holiday to an idyllic village in North Yorkshire will help her recover. Nestled in the middle of five moors, Mary expects to have a boring week stuck in a caravan with her parents. Little does she know, evil lurks in the campsite…

Seth Lockwood—a local fairground worker with a dark secret—might be the key to uncovering the murky history that has blighted Nettleby. But Mary is drawn to him in a way that has her questioning her judgement.

Helped by her dead best friend and a quirky gay Goth couple, Mary must stop the unusual deaths occurring in Nettleby. But can she prevent her heart from being broken?

A spine-tingling tale with romance, readers will be shocked and entertained in equal measure. With some scenes of horror and some strong language, this book is best suited for readers aged fifteen and up.

When Mary visits her Aunt Izzy’s remote seaside bungalow, past and present collide. She soon realises a dark shadow hangs over her childhood memories, leaving her a task she would rather not complete… A haunting ghost story that explores the delicate relationships between women.

In 1997 Isabel Quirke sits down to write a letter to her sister. A letter she never intends to send. Within the pages of that letter she describes the frightening events that lead up to the disintegration of their relationship.

Susan Quirke, before she became Susan Hades–mother of Mary–goes through a transformation so extreme it changes her forever. Her younger sister Isabel can only watch.

Mary Hades is drawn back into the world of the macabre as she moves with her family into the mysterious old house, Ravenswood. The mere mention of Ravenswood induces terror among the locals, and when strange things begin to occur, Mary and Lacey decide to get to the bottom of the secret hidden in the historic house once and for all.

As a dark power gathers, Mary finds her life becomes interconnected with the disturbing events that transpired in 1847 to eleven year old Liza Blair. The more Mary is drawn into Liza’s story, the more she realises someone close to her is in grave danger from the sinister energy at Ravenswood.

Set in the backdrop of an unsettling forest, and with strange neighbour Emmaline Delacroix obsessed with death and séances, Possess will take you even deeper into the murky depths of Mary Hades’s unusual life.