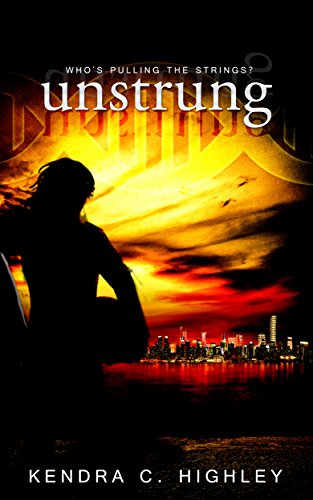 4.4 stars – 45 Reviews
Kindle Price: 99 cents
On Sale! Everyday price:
Text-to-Speech and Lending: Enabled
Don’t have a Kindle? Get yours here.
Or check out the Audible.com version of Unstrung
in its Audible Audio Edition, Unabridged!
Here’s the set-up:

Lexa Pate, seventeen-year-old thief extraordinaire, has burned a bridge or two in her life. You don’t make a career out of stealing other people’s property without making enemies.

When a risky job goes from bad to worse, Lexa and her adopted family find themselves on Precipice Corporation’s hit list because they’ve accidentally stolen the wrong thing—plans for a new model of genetically-engineered super humans. Now every bounty hunter, cop on the take, and snitch in the city is after them.

Lexa’s world crumbles around her as she fights to keep her family safe even as someone strolls out of her forgotten past. Quinn claims to know who Lexa really is, but can she trust a stranger she met while robbing his boss?

More importantly, does she really want to know what Quinn has to tell her?

Based on the fairy tale Pinocchio, UNSTRUNG takes you into a near future world where the lines between fake and real are blurred, all that’s pristine isn’t always innocent, and being a criminal isn’t always wrong.

5-star Amazon reviews:
“I hate to leave spoilers so let’s just say that inside this book awaits mystery, action, suspense galore, and romance. Keep hands and feet inside the ride at all times! Yes, I loved it.“
“Unstrung is fast paced and riveting from beginning to end.“