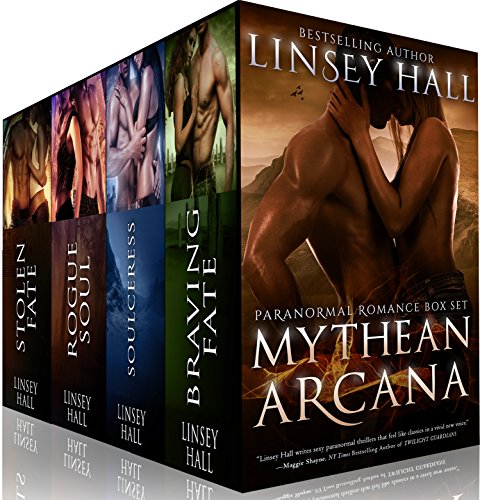 4.4 stars – 65 Reviews
Kindle Price: 99 cents
Or currently FREE for Amazon Prime Members Via the Kindle Lending Library
Text-to-Speech and Lending: Enabled
Don’t have a Kindle? Get yours here.

The first four novels in the bestselling Mythean Arcana series.

Braving Fate (Book 1)
Bookish academic Diana Laughton has been having terrible, realistic dreams. When demons invade her quiet life and she flees to Scotland, she wonders if she’s going mad. Or if perhaps she’s remembering a past life she had no idea existed…

Mythean Guardian Cadan Trinovante loved and betrayed Britain’s warrior queen Boudica two millennia ago. Now he’s tasked with protecting mortals whose lives affect the fate of humanity. His latest assignment is Boudica herself, reincarnated as a woman with no idea of her past or her fated future.

Thrown together in a shadowy world that exists alongside our own, Diana and Cadan must fight not only the demonic forces that want Diana dead, but a past and a passion that have lasted centuries.

Soulceress (Book 2)
Three hundred years ago, Warren sold his soul in exchange for the safety of his people. He lives immortal and inhuman, a life in the shadows, hiding his secrets. Until now, when he finally has the chance to reclaim his soul after three centuries of suffering…

Esha is a soulceress, an immortal who drains the magical powers of others. Shunned by everyone she meets, she’s a rogue mercenary who hunts evil for a living. The only man she cannot harm is Warren, whose secrets intrigue her and whose body sparks her desire…

Esha is the only person who can help Warren reclaim his soul. But what begins as a simple quest soon becomes a deadly battle, one in which choices will be made and secrets revealed that could tear them apart. As Esha and Warren uncover their passion, they must defeat the evil forces unleashed against them before time runs out…

Rogue Soul (Book 3)
Andrasta, Celtic goddess of victory, has fled the cold, sterile wasteland of Otherworld for the steamy South American jungle. It’s only a matter of time before the vengeful gods catch and punish her – unless she can convince the man she betrayed two thousand years ago to help…

Born in Otherworld to the life of a god, Camulos went rogue centuries ago. He’s living on the banks of the Amazon, boxing in bare-knuckled fights. The gods believe he’s dead–until Ana finds him. Ana, the woman who gave him nothing but trouble, and the woman he could never forget…

Thrown together, Ana and Cam must evade the wrath of the gods and a return to the living death of Otherworld. But as they flee through the jungle – and as their passion ignites – they find themselves at the heart of an ancient secret. One that could kill them both and extinguish their souls forever…

Stolen Fate (Book 4, a Novella)
Fiona is an Acquirer, an immortal who uses magic to hunt for ancient artifacts. Ever since she failed to live up to her fate and find the Book of Worlds, she’s been slowly losing her mind as her subconscious keeps trying to accomplish her fated task. When she’s presented with one last chance to find the Book and save her sanity, she’ll stop at nothing to accomplish her goal.

For more than one hundred years, Ian has been locked in a nightmarish prison. When Fiona presents him with an opportunity for escape, he’ll do anything it takes to ensure that it’s permanent, even if it means betraying the woman he’s grown to care for.

As Fiona and Ian get closer to finding the book, they learn that there’s more at stake than they ever imagined – the fate of the world.

“I have read every book in this series to date, and I am completely in love with everything about it! The characters, the world-building, the story line. I can’t get enough!”

“I’ve thoroughly enjoyed the four stories in this box set and it’s been a fabulous ride with it’s mixture of magic and romance. The Mythean Arcana series is full of twists and each book just adds another dimension proving just how good the authors imagination really is.”