“All 5 of these books are excellent! Each of them are packed with great characters and story lines. Fun, hot, steamy and love are a great combination.” ★★★★★5 star Amazon review 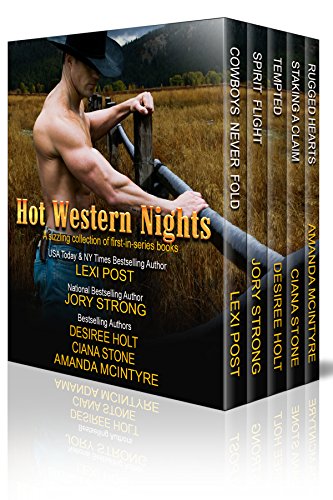 From some of today’s top romance authors, these five passionate tales of romance, from smoldering to scorching, will light up your night and melt your heart!

COWBOYS NEVER FOLD by Lexi Post
Wade Johnson agrees to honor a debt by working a three month stint as stable manager of Poker Flat Nudist Resort, but the closer he gets to discovering why the last managers left, the more he craves his sexy, smart boss, Kendra Lowe. To win her heart and save her dream, he will have to go all-in and that could mean baring more than his soul.

SPIRIT FLIGHT by Jory Strong
Betrayed, terrified and running for her life, a desperate attempt to escape her pursuers sends Marisa over a canyon rim and plummeting downward. Left to die where she’s fallen, she regains consciousness in a cave with a warrior who makes her heart beat to the sound of an ancient drum, and whose possessive touch and heated glances claim she’s his mate. Ukiah cares for her. Makes love to her. Conquers her with pleasure. But a choice to leave the cave leads Marisa back into danger—and to the lover whose spirit takes flight in the storm.

STAKING A CLAIM by Ciana Stone
Lust was a horse he could ride. Love? He didn’t believe in love. Jed Nash had a few simple rules in life. (1.) Family always comes first, (2.) Know when to keep it in your pants, (3.) Don’t mix business and pleasure, and (4.) Don’t believe in love. All it brings is misery and heartache. Jed had no trouble following his own rules. At least not until the new trainer on his ranch shows up. He was expecting a man. What he got was a woman who had him battling attraction that was hot and wild. Sure as sunshine, if she stayed he wouldn’t be able to keep his hands off her.

TEMPTED by Desiree Holt
Shea Prescott was astonished when millionaire Cruz Castillo chose her to design his new home on his ranch. They hardly traveled in the same circles. But Cruz had been hot for Shea since he first saw her and at their first meeting the chemistry between them ignited. She was hesitant to involve herself with him but the temptation became too great to resist. The question was, what would happen next.

RUGGED HEARTS by Amanda McIntyre
Left scarred by betrayal, rugged Wyatt Kinnison’s focus is as head of the rnach left to him and his brothers. Love is NOT in the forecast. But a determined teacher blows in with an unexpected winter storm and threatens to thaw his frozen heart.
When an accident claims her twin sister, Aimee Worth chooses to live out her sister’s dream of teaching. Unprepared to find Mr. Right–much less in the form of the Grinch–she sets out to melt the sexy cowboy’s heart heart with the magic that is Christmas. “Raw charm…one to read.”~ Publisher’s Weekly