We’re happy to share this post from our sister site, Kids Corner @ Kindle Nation Daily, where you can find all things Kindle for kids and teens every day!

Last week we announced that Laurel Veil’s Fairy Godmothers Are For Wimps is our Kids Corner Book of the Week and the sponsor of our student reviews and of thousands of great bargains in the Kids Book category:

Now we’re back to offer a free Kids Corner excerpt, and if you aren’t among those who have downloaded this one already, you’re in for a treat!

Fairy Godmothers Are For Wimps 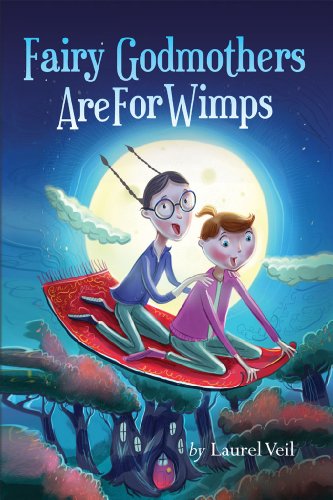 Ever been invited to dinner only to find out, you’re the main course? That’s sort of what happened to Haley Elizabeth.Twelve your old Haley is a lazy member of the Spring Hills Middle School student body, in the town of, you guessed it, Spring Hills. She is a so-so scholar unlike her science fair winning, cheerleading, flute playing sister, Hannah. She is also a procrastinator who stinks at the violin.Life gets a little better for Haley when she becomes acquainted with Juniper Hagglesworth – language arts teacher by day, fairy godmother by night…or so Haley thinks.Ms. Hagglesworth helps Haley get out of a few jams, but Haley will learn that Ms. Hagglesworth’s help comes at a very expensive price.Can Haley get a grip on this magical mayhem before it’s too late? Or will her situation take a strange and surprising turn? Find out in this humorously enchanting new book, specifically geared towards young readers in elementary and middle school grades.

And here, for your reading pleasure, is our free excerpt:

My best friend, Sara, and I grabbed our books and left the freezing cafeteria. We were stuffed and feeling tired.

We couldn’t have walked any slower down the noisy hallway if we’d tried. You would have thought we were heading to a funeral instead of our gym class.

“I just can’t understand why our councilors scheduled our PE class immediately after lunch,” groaned Sara.

She had been complaining about this since school began two weeks ago. We were in sixth grade, and it was our first year to be in middle school.

“Well…at least we get to suffer together.” I smiled, trying to find the bright side.

We were seconds away from being tardy, so we quickly changed into our gym suits, put our things away, and then ran out of the locker room and joined the rest of our class on the court.

Half the class, including Sara and I, lay on our backs while our classmates held our feet to the floor, and we strained to do sit-ups. We were miserable.

Sara and I gave each other relieved looks. We had survived another day of sit-ups.

Now it was our turn to be feet holders. This was a potentially dangerous job. If you don’t hold on tightly, a shoe can fly at you and nail you right in the nose. Or worse, your partner can give you an accidental blast.

Coach Semper—or, as we like to call her, Coach Temper—began screaming the count again. “One! Two!”

Before she could say three, Shelly Jenkins had an escapee! It was a doozy—and Sara was holding her feet. I wasn’t sure who was more embarrassed.

Poor Shelly! The sound vibrated off the court like an NBA basketball and echoed up into the rafters. There was no denying what had happened.

When everyone calmed down, we finished exercising and headed outside to play flag football.

I was dying to take a jab at Sara. When no one else could hear, I said, “So, how’s it going, fart face?” She didn’t think I was funny.

We tried our best to avoid sweating. We put as little effort into playing the game as possible. Autumn in Spring Hills is rough, though. The sun had us soaked in no time. Our maroon-polyester shorts were damp, and we had pit stains on our cotton tees.

“Eww! We are so sweaty, Haley. Coach Semper better not make us shower!” Sara grumbled nervously in my ear.

Sara has a real phobia about taking her clothes off in the locker room. She still sneaks into the bathroom stall, pretending she has to go, so she can change in and out of her gym suit without anyone seeing her.

I don’t blame her, though. Jessica, Madison, and Kate had laughed at her on the first day. They said she wore granny panties. Sara was mortified.

Jessica, Madison, and Kate think they are all that. They do everything together. It’s like they are attached at the hip. They are a three-headed beast that shares one brain. Sara can’t stand them. Neither can most of the school.

“Would you chillax?” I said, trying to calm her down. “Coach can’t force us to take showers. I thought you would have wanted to wash Smelly Shelly off of you, though.”

At last Coach Semper blew her whistle, and we were dismissed.

Science class wasn’t as bad as gym. But dealing with Mr. Kerry, aka Mr. Hairy, on the other hand, can sometimes be worse than doing sit-ups after lunch. I’ve never seen him smile. He is a miserable human being.

He is almost bald, but he still works the comb-over. He has so much hair shooting out of his ears, though, I don’t know how he hears a thing. His brows are bushy too, and there is a long, stray hair in each one that resembles an insect’s antenna. He looks like a cockroach. I wished I had science with Sara and Miss Feltch.

“Settle down,” Mr. Kerry said with zero emotion. Jessica, Madison, and Kate continued their conversation as if he had never spoken.

“Listen up, folks!” Mr. Kerry bellowed in his gruff voice. The room was silent now. He stood more than six feet tall and was almost three hundred pounds. He limped slowly around the room with a brown, wooden cane. It was rumored he had been going to play football for the NFL but hurt his knee in college. He got stuck teaching us science, and that’s why he is so mean.

“Spring Hills Middle School will be having its science fair the first week of November. Your project is due bright and early on Monday, November third. That’s the Monday after Halloween. So, if you have big plans for this Halloween, you’d better make sure your project is ready before then.”

I whispered a little too loudly to myself, “Actually…I do.”

“What was that, Miss Stark? I didn’t catch what you said,” Mr. Kerry responded.

This man terrified me. “Uh….You mentioned something about us having plans for Halloween. I was just saying that my birthday is on Halloween.” The entire room was silent. I was so embarrassed. “That’s all. Sorry, sir.”

“Thank you for that information, Miss Stark. Are you finished?” he asked.

I nodded my head and looked down. I wished I could have disappeared.

“I expect to see an entry from each of you. It will count as fifty percent of your grade for the six weeks. So don’t mess up!”

He proceeded to limp from row to row, passing out the instructions for the science fair. There was probably a dozen or so pages stapled together per packet. It was intimidating.

“I’ll give you the class period to look over the guidelines and brainstorm some ideas. You have the rest of September and all of October to complete your project. You’ll need it. I suggest you get started, and whatever you do, don’t procrastinate!”

Who did he think he was kidding? What he really meant to say was, “I have nothing planned to teach you today. I am going to sit down now and read my Sports Illustrated and dream it is me on the cover. So leave me alone!”

I took the packet and reluctantly began flipping though it. The more I read, the more overwhelmed I began to feel. I didn’t know where to start. I had always had trouble in school, especially with math and science.

There were only two good things about math with Ms. White. The first was that I sat next to Sara, and the second was it was my last class of the day.

“Are you freaking out about the science fair?” Sara asked the moment she saw me. “I already think I know what I’m going to do.”

“Seriously? Are you for re—”

“Miss Stark! Miss Mancini!” Ms. White barked at us and then flipped off the lights. She took a seat at her overhead projector. “Is it okay with you two if I begin my class now?”

I had to bite my tongue so I wouldn’t giggle. When she says “miss” it sounds like she is saying mith. She has a slight lisp, and when she gets aggravated it gets worse.

Sara and I didn’t dare look at one another or we would die laughing.

Ms. White finally quit staring at us and addressed the class. “Please excuse my dear aunt Sally. P-E-M-D-A-S. Commit this to memory. This is the acronym we will follow to solve order-of-operation problems.”

I found it hard to concentrate on what was on the screen. Ms. White spits when she talks, and you can see it clearly in the light given off by the projector. She was like a human lawn sprinkler.

Uh-oh! No, ma’am. I haven’t heard a word you’ve been spraying—I mean saying.

“Sorry, can you please repeat the question?” I asked in my super-polite voice, which is an octave higher than my normal voice.

The whole class turned and looked at me, and Cute Mike smiled!

She finished her lesson and then assigned us homework just as the bell sounded. Sara and I headed to our lockers and filled our backpacks. Next we swung by the orchestra room so I could pick up my violin, and then we began our long walk home.